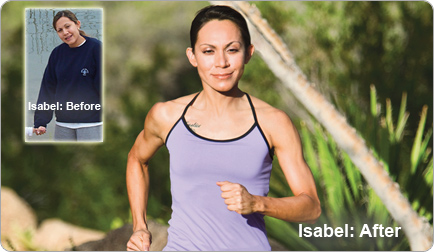 Working out was never a problem for Isabel—ever since she was a teenager, she has exercised regularly. But her active lifestyle was no match for thegreasy food she loved to eat. By the time she was 29 and had two children, she was 30 pounds overweight.

Between taking care of her kids and working long hours as a police officer, Isabel had no time for herself. “I knew I should try to exercise more and cook healthier food, but it just wasn’t a priority,” she says. “I wanted to spend every free minute I had with my children and felt guilty when I didn’t.” But then one day she caught herself snapping at her daughters. “I was so stressed, I was taking out my frustration on my kids,” she says. “It dawned on me that if I wanted to be a good mom, I needed to do something that made me feel good, and that meant getting healthier.”

Isabel’s first step was to sign up for a gym membership and start taking group classes. “With an instructor telling you what to do, you’re forced to work out harder,” she says. She began with cardio kickboxing, then expanded to step aerobics, cycling, and sculpting. After six months, Isabel had dropped 10 pounds. “I was seeing some results, but not as many as I wanted to,” she says. “And it was obvious that I wouldn’t until I tackled my unhealthy diet.” Because Isabel loves food so much, she didn’t want to start eating less of it. “I knew I’d never be successful if I forced myself to cut way down on my portions,” she says. “So instead, I started bulking up my meals with low-calorie foods.” She began every dinner with a salad, added lots of veggies to her sandwiches, and made smart substitutes, like replacing white potatoes with nutrient-rich sweet potatoes for her side dishes. She also limited dessert to no more than 150 calories a day. After a year and a half, she’d dropped 38 pounds.

RELATED:   Male Before And After Weight Loss: Dave Loses 57 Pounds With Diet And Exercise

Isabel is amazed at how different she feels now that she’s healthy. “I always used to pick my body apart in the mirror, focusing on what I wished looked different,” she says. “These days, while I still have areas I’d like to keep improving, I always remind myself of how lucky I am that my body functions well. So while I’m always going to exercise, I’m not going to beat myself up in the process.”

1. Keep everyone happy “My husband doesn’t always want my healthy meals, so I’ll prepare one dish two ways, like breading his chicken and baking mine plain.”

2. Have an eating game plan “Jot down what you’re going to eat in a food diary before you take your first bite. You’re more likely to stick to the amount you wrote.”

3. Experiment! “To avoid boredom and challenge different muscle groups, I like to look at the gym schedule and pick a class I’ve never tried before.”