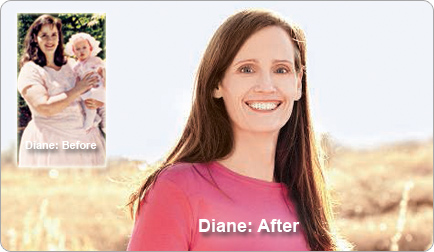 Weight Loss Success Stories: Diane Carbonell
When Diane got married at 21, she was a fit 160 pounds, thanks to regular bike rides and a passion for running. But once she started having kids—and stopped making time to exercise— the weight began piling on. Within eight years, she had ballooned to 305 pounds.

Diet Tip: Find the Right Motivation
Diane loved being a mom to her three children but found it hard to keep up with them because of her size. Then, when she was 31, she went in for a routine checkup and realized how bad things had gotten. “My doctor told me my weight was getting out of control,” she says. “It dawned on me that if I had already passed 300 pounds, what was to stop me from reaching 500?” Diane got in her car and cried. “I worried that if I kept going down this path, I might not live to see my kids grow up,” she says. “Something had to change.”

Diet Tip: Setting Achievable Goals
The next day, Diane woke up early, eager to do something healthy. “I only walked outside for 10 minutes, but I felt so proud of myself,” she says. Every day she upped the length of her walks, soon adding strength moves, like biceps curls and crunches, to her routine. “I had to get creative: I squeezed in exercise before my husband went to work or took my two youngest kids with me in a stroller while the oldest was in school,” says Diane. She started seeing results immediately— her energy level rose while the number on the scale dropped. She began losing around 2 pounds a week. Diane’s next step was to improve her diet. “I could never stop myself when it came to eating something bad for me—I’d always end up having all of it,” she says. “So I created rules: I would limit my fat intake to 30 percent of my daily calories, cut out junk food, and measure everything I ate.” With those adjustments, she kept making progress. “I knew that each pound lost was one I’d never have to see again,” says Diane. After 14 months, she got down to 146 pounds.

Diet Tip: Celebrate Success
Realizing how much easier being a mom was now that she was healthy, Diane became eager to grow her brood. She and her husband, John, ultimately had four more children— and Diane bounced back to her prepregnancy size after each one. “Sticking to my new habits helped me stay on track,” she says. “Losing the weight wasn’t easy, but it has enabled me to live the life of my dreams.”

Diane’s Stick-With-It Secrets:
1. Picture your goal “I taped an article about a woman who had dropped a lot of weight to my closet door— she reminded me that success was achievable.”
2. Start out small “On days I don’t want to work out, I tell myself that I need to do just five minutes and then I can stop. I usually feel so good, I keep going.”
3. Make sure calories are worth it “If I’m at a party and I’m tempted by a bunch of delicious-looking treats, I don’t try all of them. Instead, I take a nibble of one, rate it, and finish it only if it scores a 10.”