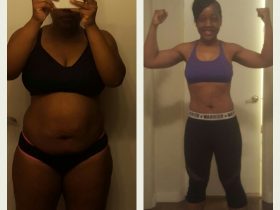 Kara Thayer used food to soften the pain of losing her mother — but a new-found passion for running helped her shed the pounds and meet her fitness goals.

When Kara Thayer lost her mother in a car accident at age 13, big meals softened her grief. “From then on, I turned to food whenever I felt sad or lonely; eventually I hit 240 pounds,” says the recruiter from Denver. Once she started channeling her feelings into exercise, she lost 90 pounds. “I’m no longer a person who eats for comfort,” she says

French Food, American Portions
In high school, Kara had a healthy diet and took part in gymnastics and tennis. Still, she weighed about 170, thanks to large portions. “Instead of one Nutri-Grain bar, I’d eat three,” she says. An activity dip in college pushed her weight to 200. Then she got a job teaching English in France. “I was lonely and bored, and I ate to cope,” she says. A year later, she came home 40 pounds heavier.

Facing Facts
Soon afterward, Kara’s father, a doctor, told her that her weight put her at risk for diabetes. “My feelings were hurt, but I knew he was right — my weight was making me unhealthy as well as unhappy.”

Kara started walking three miles five or six times a week. “I was surprised to discover how hopeful I felt after every workout,” she says. That gave her the confidence to change her diet. She nixed cream sauces and beer and added more fresh fruit and vegetables. “Also, I stopped cooking big dinners so I couldn’t have seconds,” she says. Within five months, Kara had dropped 40 pounds. Switching her workout from walking to water aerobics, Spinning, and running helped her reach 150 over two years.

Kara recently completed her first marathon. “Running is my new passion,” she says. “Instead of taking solace in food, I draw strength from moving my body.”

Kara’s Healthy Eating Plan
The Diet: Breakfast is oatmeal with strawberries or melon. For lunch, Kara eats lentil or vegetable-barley soup with apricots or berries. At dinner, she has a small piece of lean red meat, brown rice, and corn on the cob. Kara snacks on fruit, fat-free yogurt, and carrots.

The Workout: Kara does an hour of running or cycling six days a week and weight-trains twice a week.

Biggest Temptation: Chocolate candy. “When I get a craving, I dump a small package of M&M’s into a bowl of plain popcorn and munch away.”

What She Couldn’t Wait to Wear: Fitted tops. “I used to buy men’s shirts so I wouldn’t have to shop in the ‘big girl’ stores. Now I can wear things that hug my body.”