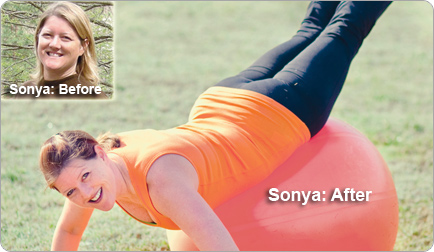 As someone who was called “toothpick” as a kid, Sonya never thought she’d struggle with her weight. But around age 30, that all changed. Suddenly the number on the scale started inching up, and in 10 years she reached 190 pounds.

Diet Tip: I Decided to Be An Example

Soon after her 40th birthday, Sonya could barely button her size 16 pants and felt horrible about it—and herself. “The prospect of having to shop in specialty stores for my clothes was a real wake-up call,” she says. “I couldn’t deny how large I’d gotten anymore.” For years she’d also been encouraging her husband to take better care of himself—and saw this as an opportunity to help both of them. “Nagging him wasn’t getting me anywhere,” she says. “I thought that instead of telling him what to do, I’d show him how it’s done by losing weight myself.”

Diet Tip: Break Out of Your Comfort Zone

Hoping she could simply exercise the pounds away, Sonya left her diet alone and joined a gym. “I took a cardio dance class and felt uncoordinated and silly,” she says. “But I told myself I was going to have to get out of my comfort zone if I wanted to succeed, so I kept going three or four days a week after work.” Six months into her new workout routine, Sonya had mastered that class, as well as body sculpting and aerobics. She’d also dropped 10 pounds. “I was fairly happy because things were moving in the right direction, but the weight wasn’t coming off as fast as I thought it should,” she says. “That’s when I realized I would have to improve the types of foods I was eating as well.” She picked up some nutrition books and read up on the basics of a healthy diet. “I saw that I needed to scale way back on fatty meats, processed foods, and sugar,” she says. Sonya cut them out and also gradually replaced her mayo-heavy tuna and cheese sandwiches with protein- and fiber-filled meals like black-eyed peas and veggies sautéed in extra-virgin olive oil. These adjustments paid off, and soon her weight loss sped up to about 2 pounds a week. After 16 months, she stepped on the scale: She was down to 142 pounds!

Diet Tip: I Inspired My Husband

Just as she’d hoped, Sonya’s husband was inspired by her results. “He’s much more conscious of his health now,” she says. “I don’t bring junk food into the house anymore, so his diet is better. And I love that he likes to go on long walks around the neighborhood with me—it’s good for our health and our marriage.”

1. Spoil your appetite “If I’m going to a party or out to dinner, I eat an apple or a handful of almonds first so I’m not ravenous when I show up.”

2. Keep tabs “I record everything I eat in an online log called myfooddiary.com. It calculates my fat and calorie intake—and tells me what my diet is lacking.”

3. Be self-centered “I used to think it was selfish to take time to work out, but I realized the opposite is true. Improving your health means you will be able to take care of others—and yourself—for years to come.”