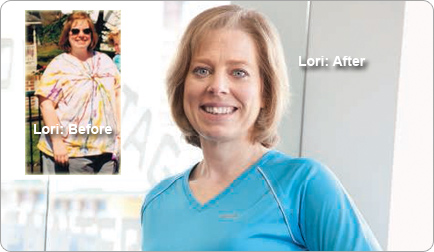 Weight Loss Success Stories: Lori’s challenge
Having a healthy lifestyle was never easy for Lori. As a teen in gym class, she was teased for running slowly; embarrassed, she swore off exercise. If she wanted to eat better, she’d switch to lowfat cookies but polish off the box. She kept gaining until, five years ago, she hit 250 pounds.

Diet Tip: My Glimpse into the Future
While Lori had never enjoyed stepping on the scale, the worst moment was when she looked down and saw the needle pointing to 250. “That day I realized I was halfway to 500 pounds,” she says. “What’s more, my mother, who was also heavy, had just been diagnosed with diabetes. I was scared that if I stayed on this course, I would run the risk of developing the same life-threatening illness.”

Diet Tip: I Started with Small Changes
Lori started by doing research on nutrition. “I realized I was eating way too much sugar and white flour,” she says. “I craved cookies, bagels, and fancy coffee drinks all the time.” She slowly rotated in healthy alternatives. Instead of a cinnamon-sugar bagel for breakfast, she had a whole-wheat one. “The fewer sweets I ate, the less I craved them,” she says. “I learned to appreciate the natural flavor of my food.” Her weight started dropping—by about a pound a week. As Lori was improving her diet, she also began doing some light exercise. “My husband had a weight-lifting machine in our basement, so I used that until I felt comfortable enough to switch to free weights,” she says. After a year and a half, she decided to add cardio and bought a bike. “I always thought I’d enjoy cycling, but it seemed too hard when I was heavy,” she says. “Once I reached 175 pounds, I couldn’t wait to hit the paths in my neighborhood!” Even with her extra workouts, the weight took its time coming off. Finally, after three years, Lori got down to a fit 145 pounds. “I wished I had lost the weight faster,” she says. “But I just kept plugging away at my own pace.”

Diet Tip: I Got in the Game—For Good
To challenge herself, Lori decided to try running again. “The first time I did it, I thought about all the mean things my classmates had said,” she recalls. “But I told myself I wasn’t the same person I was in high school and pushed those voices out of my head.” Lori soon fell in love with running. “I used to think that to be active you had to look like an Olympian, but I learned we all have an inner athlete waiting to come out.”

Lori’s Stick-With-It Secrets
1. Make your own healthy fast food “I cook a pot of brown rice on Sundays. During the week, I know I can just mix it with veggies and chicken for a quick meal.”
2. Never stop learning “I love borrowing books on weight lifting, cooking, or overall health from the library. That way I’m always picking up new tricks for free.”
3. Don’t demand perfection “I just came back from a cruise and put on a few pounds from the rich food. But I know I’ll go back down when I return to my old routine.”

RELATED:   Men Before And After Weight Loss: I Lost An Amazing 124 Pounds By Changing My Attitude