Men Before And After Weight Loss: Zachary Lost 165 Pounds To Be An Ironman 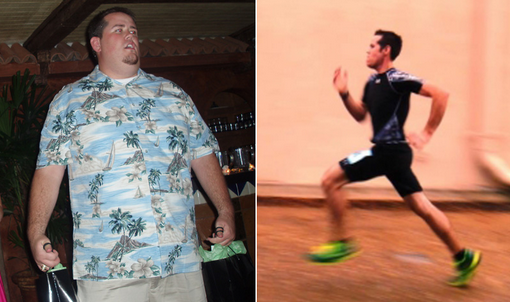 How I Gained It: Growing up, my whole family was overweight. While I love my family and wouldn’t trade them for anyone else’s in the world, I didn’t have an example of a healthy lifestyle to follow in my home. As long as I can remember I was heavy — it became who I was and in many ways defined my very existence (my college nick name was “Big Fun”). I embraced my size and never once thought about it ever catching up with me. I would eat when I was bored, I would eat when I was upset or stressed; nothing ever seemed to comfort me like food did. When I look back now and think about all the times I would eat an entire large pizza by myself and finish that off with a 2-liter of Coke, I am amazed I am still alive.

Breaking Point: I had just recently graduated from college and married the love of my life. We bought our first house and were expecting our first child. I had been dealing with some stress at my new job, which was taking its toll on me physically. I was already in bad shape as it was. At the time, I was topping the scale at 350 pounds, up slightly from the 325 or so I had carried through college and most of my young-adult life. I was having terrible stomach issues and muscle spasms in my arms and legs. I visited numerous doctors, had dozens of tests done, and in the end I finally had a doctor tell me I should probably try exercise to help me reduce stress and start eating healthier. That’s the moment for me that I snapped. I called my wife on the way home, and told her I had had enough. I was going on a diet and going to exercise, and that “I MEAN it this time.” She supported me, but I don’t think either of us knew just how far I would take it.

RELATED:   Weight Loss Before and After: Heather Shed 75 Pounds With Portion Control And A Scale

How I Lost It: I had to change my whole perspective on food. It did not take a dietitian to tell me that drinking sugary soda all day, as I had done my whole life, was a bad idea. The same goes with the food I ate. I ate more lean meats, like chicken breast and lean pork. I cut back on red meat, and slowed way down on things I knew were red flags for me. I cut out pizza, and I never eat fried food. For me, they are off limits. White bread was out, whole wheat was in! Oatmeal in the mornings, and coffee minus the creamer and sugar. I ate more fresh fruits and vegetables, and cut out potato chips. I followed these new diet rules and ran and walked on my own for the majority of the spring of 2010.

Then, I joined my local running club. That’s where I met the people who would become my support group as I worked my way through different races and distances. I joined in the summer of 2010 and ran my first 5K that October. I completed my first half-marathon that December. I said afterward that this distance was the farthest I thought I would ever run, and that I would probably take some time off and then do another half the following year. Three weeks later, I started training for my first marathon.

RELATED:   I Lost 65 Pounds: Bernita Makes Health A Priority And Loses The Weight

It was unseasonably hot and extremely windy for my first full marathon, the Texas Big D Marathon in April 2011. I was nowhere near my goal pace, but I finished and thought at that point I had reached the pinnacle of my running career, a 4:51 marathon. But it wasn’t over for me. In December 2011, I shot for a sub-four hour marathon, but 40 degrees and a monsoon helped slow me down to a 4:24 finish. I remember thinking I was done, but I couldn’t escape! In April 2012, I signed up last minute to race again where it all started. No matter the temperature, no matter the wind, no matter what, I had to finish under four hours, and I did. Three hours and 57 minutes of pure joy!

Since then, I have completed two other marathons and a half Ironman. I am currently training for a 50-mile race in March, and I have a goal of completing my first full Ironman this year (if I have time to train!). Without my running club, and in particular my coach Hamlin Jones, I never would have gotten to where I am today. We are still a very small, tight-knit group.

What I took away from this whole experience, rather, what I continue to take away from it, is that it’s possible for anyone. I never thought I would be able to shop for normal-sized clothes. I thought I was destined to be overweight because my whole family is that way. It’s just not true. Anyone can do it, you just have to want to.