Sherri ‘Changed Her Mind’ About Eating and Lost 72 Pounds 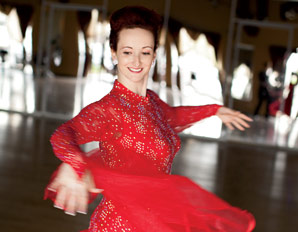 That’s what four women who’ve tried the new “mindful eating” diet plans say. They’re learning how to put the “power” in “willpower”–and you can too.

As Sherri De Jesus waltzes across the dance floor in one of her flowing gowns, its seven-layered skirt swirls about her. Its sparkling bodice, which she helped design herself, is trimmed in more than 200 Swarovski crystals and adds to the glow of confidence she now feels. Five years ago, she could not have imagined taking up competitive dancing as a hobby. But here she is, dancing 4 nights a week and competing in ballroom, Latin, and swing. It never would have happened without a childhood enchantment with Fred Astaire, a lifelong desire to become a dancer–and the weight loss tips she received at thePritikinLongevityCenter+ Spa.

Before going to Pritikin, De Jesus was in the early stages of a divorce–depressed, bored, and overeating. “Some people smoke to relieve stress,” she says. “My thing was eating–chocolate cake, M&M’s, candy bars. Sometimes I was so busy, I barely even noticed what I was chewing. There was no enjoyment in it.” All that has changed. Now she puts aside her work during meals and snacks and focuses instead on the flavors, textures, and aromas of her food–a practice known as “mindful eating.” The dual payoff is that she enjoys her food more and doesn’t need as much of it to feel satisfied. At a party, if she indulges in a cookie, she’ll take small bites and chew slowly. “Usually I don’t actually finish the cookie, because it’s really sweet,” she says. “Once you get in the habit of eating mindfully, a few bites goes a long way.”

De Jesus not only talks the talk, she now walks the walk–literally. At work, she sits up straight at her desk and strides elegantly down halls. “I didn’t know that if I held myself differently, my entire outlook on health would change,” she says. It’s a trick she learned at Pritikin in a class called Posture for Success. “By lengthening your spine and pulling back your shoulders, you instantly look better, as if you’ve taken weight off,” she says. “You feel better about yourself, so people respond to you differently. They see you as someone who is sure of yourself and sure of the message you’re presenting, which helps boost your self confidence”–and along with it, the ability to resist cravings.

It’s not just good advice for life but great for weight loss too. If you’re engaged in activities you love, you’re happier and less likely to need food for comfort. And if your hobby involves physical movement, such as a rhumba or two-step, that’s even better. “Experts warn you about the terrible things that will happen if you don’t lose weight,” De Jesus says. “But that fear lasts only so long before you go back to your normal way of living. On the other hand, if you find a positive goal that motivates you, you can stick with it. This isn’t about dieting but creating a lifestyle.”

The program: At Pritikin, the emphasis is on a healthy lifestyle. Weight loss just happens to be the result. A week at Pritikin’s resortlike campus includes 40 hours of classes, one-third of them focused on emotional eating and stress busters like yoga. There is even a field trip to a restaurant, where participants learn to avoid stealth fats, sugars, and sodium. The success of the Pritikin method–which is known for its heart health–has been documented through more than 100 studies in major medical journals, showing not only weight loss (an average of 11 pounds in 3 weeks, according to the Archives of Internal Medicine) but also improvements in cholesterol, blood pressure, heart disease, and diabetes.

Related Items
← Previous Story 114 Pounds Lost: She didn’t believe she could, but she did! How I lost over 110+lbs!
Next Story → See how Angie Logan made great changes and lost 70 lbs!