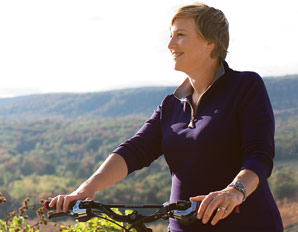 Job: IT manager and college instructor in women’s studies

Changing her diet wasn’t easy for Amy Stevens. Remember her grandma’s chocolate drop cookies? Now she doesn’t even think about them while training for–and competing in–triathlons. In mid-September, she finished her second one of the year–a team event in which she had to kayak 5 miles. “Two and a half miles into the kayaking, I was dying,” she says. Then she looked up and saw Kripalu. (She was on the lake below it.) “From that moment on, I knew I could finish the race. It was one paddle in front of the other and making the right choice with every move,” she says. “That’s what Kripalu taught me.”

Too often we eat from a dining room table that’s cluttered with newspapers and mail–if we sit down at the table at all. “I used to eat breakfast in the car out of a bag,” says Stevens. Now she gets up early to eat in peace before the rest of the family rouses. She brings out her grandmother’s good bone china plate and teacup. She gazes out her window over the peaceful Berkshire mountains while slicing apples and brewing tea. “It’s about as sacred a moment as I can create,” she says. In such a mood, mindful eating comes much more naturally. And the serenity of the early morning sets the tone for a happier day, in which Stevens is more resilient against stress.

RELATED:   Watching her weight skyrocket Lindsey decided it was time for a fresh start.

At Kripalu, Stevens learned to quell cravings with deep breaths and meditation. “By the time I’ve focused on my breath for one to five minutes, food is the last thing on my mind,” she says. “Usually I realize it’s not a real need.” And when her resolve does weaken, she no longer berates herself. She just tries to learn from her mistakes, so she doesn’t repeat them. “At Kripalu, healthy living and eating are practice,” says Stevens. “If you’re only practicing, you can’t fail.”

One of them for Stevens is the owner of a local restaurant called Stone Soup. The owner began creating special dishes for her that fit her post-Kripalu diet and were tasty, healthy, and inexpensive too. (Stevens is a regular there.) These dishes proved so popular with other patrons that they’re now on the menu. But family support has also been crucial for Stevens. “My husband has adapted with such grace and loving support, at times it takes my breath away,” she says. He’s read up on nutrition for her and searched out healthy recipes, both online and in used bookstores. He even helps cook, “and he makes sure I have fresh, local apples in my bowl every morning,” she says. Even her 7-and 9-year-old children have gone along, without too much griping. “My daughter now claims brussels sprouts with tofu is her favorite dish, and my son likes hummus,” says Stevens. “Now when the kids are bad, I threaten to take them to McDonald’s.”

RELATED:   Too fat for the roller coasters

The program: Kripalu coined the term integrative weight loss to refer to its holistic approach to slimming, yet the words weight loss are rarely mentioned during the 1-week session. Instead, the focus is on transforming your relationship with food and your body through mindfulness, fitness walks, nutrition lectures, a share circle, yoga, yoga dance, deep breathing, and nutrition counseling, not to mention three meals a day of superhealthy fare. It’s like an immersion course in healthy living.

Related Itemsyoga
← Previous Story It’s All About the Choices!!! I Even Amazed Myself!
Next Story → Judy Joiner Weight Loss