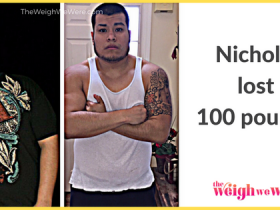 How I Gained It: Growing up I was always athletic. I played basketball and volleyball, and I swam. While in high school, I broke my leg and had to stop playing basketball. I maintained my weight, but lost a lot of muscle. But the biggest reason for gaining the weight was my pregnancy in 2009. During my pregnancy I gained 100 pounds.

Breaking Point: It was July 2012. I was tired all of the time, my body ached and my chest always felt tight. I blamed everything beside myself for being so big. It finally hit me when I went to the doctor and had to be weighed. When I saw that the scale said 258 pounds I thought I would die that size. That same day I decided it was all or nothing.

How I Lost It: I realized I had been eating around 4,000 calories a day! I talked with my doctor that day and asked about weight loss. Under his direction, I started eating 1,200 calories a day. I started making small changes to what I ate, how often I ate and how much I ate. I cut out fast food and junk food, which was really hard for me. I used MyFitnessPal to track everything I ate and how often I burned calories. I started eating grilled chicken and Lean Cuisine meals, since they were easy to track. I didn’t start exercising until I got under 200 pounds. I gave myself small goals to accomplish and let everyone know that I was trying to lose weight. I felt that by announcing my weight loss plans I wouldn’t fail — and I haven’t. I still eat 1,200 calories a day and exercise. My goal is to weigh 145 pounds. I am happier and healthier, and I strive for success daily. It has been hard, and I’ve had my difficult days, but I would rather have difficult days than be where I was last year.