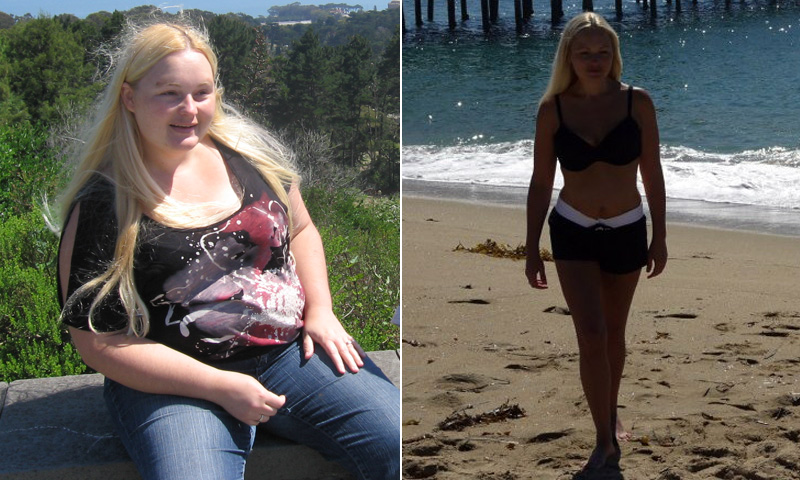 How I Gained It: I am the youngest of three girls and my sisters are twins. Blonde-haired, blue-eyed, perfect little size four hourglass-shaped twins. Then there was me. My nickname was “Chubby” and even though I was around a size 10 for my teen years, I felt fat.

I went for a jog one day when I was around 14 past some boys out on the basketball court, and I heard one of the boys ask “Who is that?” For half a second my heart soared because someone had noticed me, but then the other boy answered, “Its one of the Malone girls.” The first asked, “Grace or Jeanne?” and the other answered, “No, the ugly one.” He didn’t know I could hear, he wasn’t trying to be mean, but that was how I was known. I was the fat sister. I am not saying that feeling fat made me gain weight. The truth is I was 218 pounds because I love food, and the little voice in my head that says “Don’t eat that” is not nearly as loud or as fun as the joy I get from eating.

Breaking Point: I found out I was pregnant in June 2011. At my very first doctor appointment, I stepped on the scale and it read 218.6. I nearly fell off the scale. The nurse made a note on the chart and asked, “About how much do you think you have gained so far?” I was only six weeks along, and I hadn’t been feeling well, so I knew I had probably lost weight in the last few weeks, but I lied and told her I had gained five pounds just so I could pretend the baby was part of the reason for my weight. I decided right then that as soon as my baby was born I was going to lose all the extra weight.

How I Lost It: My youngest was born January 20, 2012. My goal was to be hot — and hopefully 125 pounds — by the time I went to a wedding on September 30, 2012. It seemed like such an ambitious goal at the time, since I had only left the hospital with baby in tow that day. I was 213 pounds at the time, and that was actually five pounds less than I had been before I got pregnant. I needed to drop 88 pounds in about 8 months. I thought it was aggressive, but doable. Then I remembered I would be up all night with baby and up all day with toddler and it seemed impossible. But I will say I have one thing working for me: I am stubborn. I decided I was going to eat fewer calories than I burn and I was going to keep doing it even if the scale didn’t always tell me what I wanted to hear.

While I was pregnant, I had gestational diabetes and needed to take my blood sugar regularly and track everything I ate. I also had some tummy troubles and began having to eat in small amounts several times a day. By the time my little one came around this was normal for me, so I continued eating a balanced blood sugar diet. I focused on lean meats, lots of veggies and fiber, and limited my sugar and empty carb intake. I gave up all fast food, which was very challenging with a newborn at home and a hungry husband, teenagers and toddler to feed. Everyday, whether I felt like it or not, I went into the kitchen and made something healthy for dinner. I wanted to give up more times than I could count, but that date was coming and I was either going to be the fat sister or I was going to be hot.

I found adding a regular exercise into my routine a little too challenging on no sleep with a tiny baby in my arms and a toddler wrapped around my legs, so I vowed to become more active. I parked farther away, I took the stairs, I carried my baby everywhere, I danced in the living room with my toddler, I took him to the park, I looked through the mail standing up, I did the hard chores I usually assigned to my teenagers, I let the toddler ride on my shoulders around the house. When summer rolled around, I swam every day, but that was more for some sanity time.
I made my goal, plus five pounds extra for vacation cushion, and I kept it a secret. That was harder than the diet! My husband and 4 year old walked up to my sister’s house first. I grabbed my bag from the car and walked in. Both twins were there and they looked puzzled for a moment. One of them said, “Where is the rest of you?” The other just stood with her mouth open. I was actually thinner than either of them for the first time in my life. They insisted upon recording the moment when my mom saw me. I had a lot of moments like that over the next few weeks.

I would love to say the greatest part of being thin is feeling healthy, but I have discovered I am too vain for that! The best part is having people make eye contact with me. I am outgoing and friendly, but it wears on your soul to have people look away every time when you smile at them. Some women are nice enough to smile back, but most people didn’t even see me.

Clothes fit and look cute! I needed a whole new wardrobe! I don’t have to run from the camera now. And I have energy! My precious little angel still does not sleep, but I am able to function during the day and even keep up with my 4 year old and the herd of teenagers that descends upon my house in the afternoons.

Funny downsides no one tells you about: I’m cold! I live in Arizona and the house is around 74 degrees, and I am wearing fuzzy socks and a robe and I am still cold. Seats everywhere are hard! I went to Disneyland a couple months ago, and I must have bruised my butt bones dozens of times. And seat belt panic! When I ride in my car I panic at least once every trip thinking I forgot to buckle my seatbelt because I no longer feel it cutting into me.

In the end, we have to look at the reasons we were where we were, and then either let them go or figure out a way to work with them.