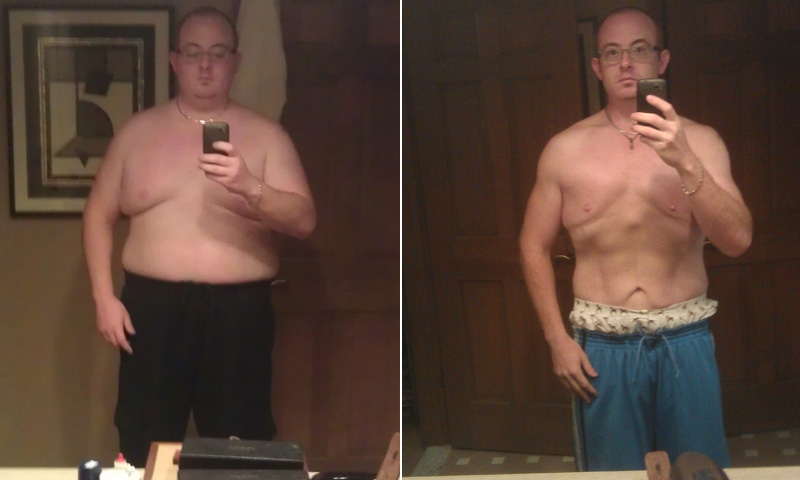 How I Gained It: Growing up fat my whole life sucked, a lot, from when I was a “husky” boy to a “big-boned” adolescent to an overweight and eventually “obese” man, it just sucked. I always accepted the person I was, just not the way I felt and looked. I was always self-conscious of the way I looked and always felt judged. I tried all those silly fad diets, but none of them ever worked for too long. I’d gain back whatever weight I lost, plus more.

I was absolutely clueless about nutrition. I would have a bagel sandwich or cereal or a muffin for breakfast, and only last week did I ever look at the nutrition label on those muffins I ate. There are 600 calories in one little muffin!

Lunches would be just as bad — a sub sandwich or pizza or cheeseburger with fries. Dinners would not be too horrible though because my mom cooks great, the only problem with dinners would be portion sizes. I’d basically eat until I was so full I was exhausted. If we had something like veal parmesan, I’d have four or five pieces, a baked potato with tons of butter on it and hardly any veggies.

Exercise seemed like a chore, so I’d only do it in spurts. I thought at least I was doing something, but I’d take a month, two months, three months off.

One of my idols, Albert Einstein, declared insanity as doing the same thing over and over again, expecting a different result. That’s exactly what I was doing.

Breaking Point: I went to the doctor’s office in January 2011 with a bad cold. I hated going to the doctor, since one of my pediatricians had always made me feel horrible about my weight growing up. I hopped up on the scale, and there was a number I could hardly believe — 294. Wow. Six pounds away from 300. My doctor recommended an app to track calorie intake, but I blew it off after two days. I told him I had a friend who was a dietitian and that I would talk to her. I didn’t right away, but eventually, I wrote this e-mail that changed everything:

Help
Hope you guys had fun New Year’s Eve. You didn’t miss much after dinner, that’s for sure. However the purpose of this email is for something far more important. I need help with getting on a proper diet, I have made the same New Year’s resolution over and over and failed over and over because I thought I could do it alone. I’ve now realized that I can’t do it without guidance. I’m hoping you can help. Is this the type of thing we can discuss outside your work place? I really do not want to resort to a gruesome surgery, I’d rather try to this naturally.
Thank you.
Tom

I had my brother’s wedding in seven months, and I did not want to look as terrible as I did for my best friend’s wedding in July 2011.

RELATED:   My 130 Pound Weight Loss Journey with PCOS: From Struggle to Success

How I Lost It: The first steps to changing my life for the better were to admit I needed help. After I emailed her, Shannon, my dietitian/savior, came to my house to assess my eating habits.

We figured out what I didn’t like, and set small, achievable goals. She planned my meals in two-week increments. We would meet every other week to discuss what worked well and things I didn’t like. We changed fruits and veggies with the seasons and added new foods that I never used to eat to keep my menu from getting boring and bland.

My first plan arrived in my e-mail inbox in the late evening and I flew to Wegman’s with my mom to get these new foods that I would need, “exotic” things like skim milk, wheat bread, wheat wraps, berries, whole grain pastas, granola, yogurt, and veggies. You know, food that has been in the store all this time! It wasn’t anything that crazy after all! The next morning I woke up ready to start this journey.

I would have a protein shake in the morning while I prepared my meals for the rest of the day, which consisted of things like oatmeal, fruit, turkey sandwiches, Caesar salads, grilled portabello mushrooms, turkey burgers, salmon burgers, Greek yogurt, peanut butter and more.

I would go to the gym after work, and focus on low weight, high repetitions for a particular body part, whether it was arms, chest, back, legs, etc. Then I would do cardio, cardio and more cardio, usually on an elliptical machine on a low resistance.

Every time I started the timer, I though I’d never get through it. I wanted to cheat, end it early, take a break. But I didn’t, I never got off the exercise machine until it said 0:00. I just kept telling myself, “You used to quit, you used to take a break, don’t give up.” I envisioned myself looking in the mirror at the finished product with my arms open screaming “I DID IT!” That vision kept me motivated, kept me going. I would say to myself, “Eat this, get that,” meaning eat well, and I’d get the results I wanted.

This routine lasted from January until March, and the pounds dropped off at a rate of about three to four per week. I was really motivated, really happy; seeing real results was the best motivation I could ask for. My clothes started to fit better, I was feeling better, people would comment saying I was doing great. I was really happy.

In March I joined the YMCA, where I signed up for 10 personal training sessions. I met with Jamie, and we discussed what I wanted to do, and he gave me 10 workouts on Saturday or Sunday that made me hate him and love him all at the same time. He taught me so much about proper form and technique and circuit training.

I was a member at the YMCA until the end of June. I shattered my goal of 60 pounds by June 1. By the time I left for Las Vegas for my brother’s bachelor party I was down 73 pounds. I had myself a custom three-piece suit made for the occasion. In Las Vegas, I ate and drank whatever I wanted. I was on vacation after all, and I think that having a few days like that was very important. I probably gained a few pounds, but I never knew it. Rather than weighing myself when I got home, I got back on the program for a full week after I returned and then weighed myself. I weighed the same as before I left, which to me was a success.

The gym and personal training were great, but exercising can get boring and monotonous, so I changed it up a bit by trying some of the Insanity DVDs. Everything was going smoothly until I hit a plateau at 206. I was stuck there for two weeks, feeling angry and disappointed, but Shannon had told me this could happen.

We changed my diet from 1,700 calories per day down to 1,500. The biggest change in this diet was portion sizes of some of the proteins, a sandwich went from 6 ounces of meat to 3 ounces, a steak for dinner went from 6 ounces to 3 ounces, we took out an additional snack at night. Nothing crazy, nothing dramatic, but it worked. At 203, I was now just a few pounds away from breaking out of the 200s for the first time in a long, long time. A week later I saw 199 on the scale, and I was ecstatic. I was so proud and happy, but still had work to do.

We set my goal weight at 185 pounds, but that recently changed. Remember that suit I had custom-made for me back in June? Well, I tried that on because I needed it for Shannon’s wedding. And it was so big on me, it was like someone else’s suit! They needed to completely re-do jacket and pants, take them apart at each seam and fix it. At that point, I realized I was done, because I am happy with what I see, I am content with the work I have done and I am satisfied with my results.

It has been a lot of work, and a lot of sacrifice, but it has been the greatest accomplishment of my life. Losing 100 pounds was something I only read about in magazines or heard about from people that had surgeries done, not something I ever thought I would actually do. But I did it. Now I just need to maintain it.

I went from a size 42 waist to a size 34, a XXL to mostly mediums or larges. I still plan on landing at 185 through exercise and responsible eating, I just don’t feel like it is something I have to do in any set period of time.