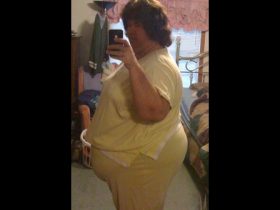 How I Gained It: I have always battled with weight issues and grew up in a family where food was the focal point of every gathering. I had gained and lost weight a number of times in my younger years, but by my mid-30s began to accept the reality that I would always be overweight and became less concerned about what I ate.

In 2003 and the years to follow, I experienced a significant number of losses in my life. First, I lost a job that I loved and devoted myself to for 15 years. I moved 200 miles away from friends and family to begin a new job. Shortly after my move, I lost two very significant men in my life: my grandfather and my closest friend. I was with each of them as they took their last breaths. The grieving process began, but was compounded by the loss of my new job due to funding cuts. Soon I found myself unemployed again. I was far away from family and close friends and began to fill the void with food. I think subconsciously I was trying to protect myself from getting hurt again, so I created a barrier of weight around me to keep others away.

I was in a lot of emotional pain, but was suddenly feeling a tremendous amount of physical pain as well. There were days when I could hardly walk, and none of the medications and treatments prescribed by various doctors seemed to help. About a year later, I was finally given a positive diagnosis of rheumatoid arthritis, but by that time, the pain was so great that I could hardly move. My initial treatment involved medications that made me vomit and feel sick all the time. The doctors prescribed several different medications, but none of them worked. I tried to cope with the pain, the realization that there is no cure for RA and that I would likely end up in a wheelchair before my 50th birthday. To deal with it all I ate more. I developed an addiction to peach soda, drinking at least two liters a day. Those extra calories and my lack of physical movement began to pack on the pounds.

The heavier I got the more pain I experienced. Before long I weighed more than 400 pounds and was dependent on an electric wheelchair, wheeled walker or cane to get around. The physical pain was overwhelming and there came a point when I could hardly take care of myself.

Breaking Point: I began to have several “epiphany” moments after my beloved grandmother died in January 2011, including a conversation in late February with my rheumatologist. During a routine check-up, I informed him that I couldn’t live with the pain much longer. He told me that he was at a loss as to what to do for me because we had already tried multiple medications with little relief. His words, “I think you ought to be less concerned about living like this, and more concerned with just living,” really hit home. I left his office thinking if he couldn’t do anything for me, perhaps I had better do something for myself.

A couple of days later, on March 1, 2011, my sister called me to tell me that she had been scheduled for bariatric surgery. We had a rather tense conversation in which I begged her to reconsider the surgery; I was very afraid that something would happen to her and was opposed to her proceeding that way. She told me she had made up her mind and was going to have it. Well, that was the beginning of my journey! I hung up the phone, stated out loud, “I’ll show you,” opened my refrigerator and proceeded to dump the two-liter bottles of soda down the drain. I then dumped the contents of the sugar bowl in the trash, and from that point on, I never looked back.

How I Lost It: I didn’t follow any specific diet plan, but rather focused on calories. I began to read labels and purchased a calorie counting book off of eBay. I became extremely conscious of the number of calories I was accustomed to consuming on a daily basis, and began to limit my intake to around 1,000 to1,200 calories each day. I ate three meals and a snack, and started drinking a large amount of water with sugar-free flavor packets. I consumed between one and two gallons of water each day. The weight began to fall off at a rapid pace. Because I was over 400 pounds, it took a lot of calories just to eat, sleep and breathe, so when I started shaving about 3,000 to 4,000 calories off my usual intake, I began to lose weight very quickly. These immediate results kept me motivated.

Now, I am a totally new person. Although I still have RA (it never goes away), my symptoms have improved dramatically, and I no longer depend on a mobility device to get around. My motorized wheelchair sits in my office at work with a sign that says “Theresa doesn’t live here anymore” as a reminder that my motivation was to walk again. I no longer have to order clothes from a catalog and can shop in the Misses section and wear more stylish clothes. For the first time in my entire life I am at an average weight for my height and not considered obese. My medication needs have been reduced dramatically, my blood pressure has stabilized and I only need serious pain medications when the RA flares up. I’m not sure who this new person is when I look in the mirror, and I’m a work in progress, but I am so grateful to have been given this second chance at life. I am a walking, talking miracle and a participant in life as opposed to a spectator.