I Lost Weight: Teresa Kidd Wanted To Be Able To Care For Her Grandson And Lost 132 Pounds 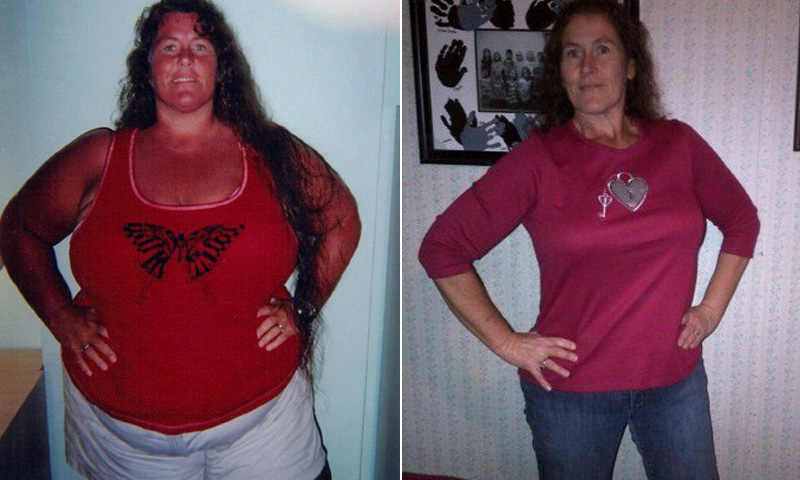 How I Gained It: I grew up on a farm in Kentucky. Fried foods rich with grease and butter were the norm. In a region rich with poverty, cleaning your plate was almost mandatory. As a child, I worked long hours in the field and quickly learned to eat a lot, as it would give me energy for those long hours. My family didn’t know that the unhealthy eating habits being taught to me were going to haunt me for a very long time.

When I was 8 years old, my dad was killed by a drunken driver. I think that’s when I discovered food as comfort. My world was so drastically changed and food became the one sure thing I could count on. I have two older sisters and a twin sister, all of whom are a normal weight. They were always told they were the pretty ones, while I was the “hard worker”. I hid in the background. I grew my hair very long to shield me. I wore my brothers’ hand me down clothing as I was too large for any of my sisters’ things. By the time I was in the 8th grade I weighed over 200 pounds.

I was married when I was 18 to my childhood sweetheart, and by this time had eaten my way to a very unhealthy 250 pounds. At 20 I became pregnant. My pregnancy became high risk. I delivered prematurely and learned I would not be able to have more children. My husband and I both love children, so this news was heartbreaking. The following sadness and depression were overwhelming. I turned to food even more than before, until I was at my heaviest weight of 330 pounds. Working 12-hour shifts as a nurse most days, I would have to ask myself, “Can I do this one more day?” I could barely walk the hallways, let alone take the stairs. I felt very defeated and believed this is how it is always going to be. I had resigned myself to the fact I would be in a wheelchair by the time I was 60.

The only bright spots in my life were my husband who was always very loving and supportive and a grandson whom I adored. Our grandson came into our home at birth due to a very precarious situation involving drugs and physical abuse. We obtained full legal custody when he was 2 years old. He brought happiness and warmth back into my heart that I had not known for a very long time, and he did not notice that his Grandma was over 300 pounds. He gave me the reason each and every day to push on.

I was diagnosed with asthma when I was 29 years old. Three years ago in December, due to years of hard labor and heavy lifting at such a young age, and my morbid obesity, I had to have a dissection and fusion of my cervical vertebrae. I now have donor bone in my neck as well as titanium rods and screws.

Breaking Point: In January 2012 I had a very serious asthma attack, which led to status asthmaticus. No amount of steroids or treatments could seem to reverse it. Being a nurse, I knew how close I was to having to be mechanically ventilated, placed on life support as my lungs were not working to oxygenate my body. I was dangerously close to steroid-induced diabetes. It felt as if a ton of bricks had slammed into my chest. I knew that should I ever become physically unable to care for our grandson the family court system could take him. And I recalled painfully what those first few months of life were like for him being in a severely abused and neglectful situation. I had vowed I would never allow him to become one of the sad statistics. And so I prayed for the strength to get control of my eating habits and to get healthy for this little boy whom I love. My love for him is stronger than any food.

How I Lost It: I got well enough to leave the hospital but still was battling my asthma. I cleaned out my refrigerator and cupboards of all those unhealthy treats I had turned to. I restocked with an abundance of fresh fruits and vegetables and healthy snack alternatives. I sat down with a journal and wrote up a plan I knew I could stick with and that would fit my lifestyle. My goal was to lose 150 pounds, but I broke it down into 20-pound increments. After I would attain each 20-pound goal, I would think about what had worked and what had not. I like to think of that 150 pounds as a mountain I had to climb. But if I chipped away at it in small pieces it was actually only stepping stones I put behind me.

RELATED:   How I Lost 103 Pounds: Scott Drops The Weight With Small Changes

I bought a push mower and decided to no longer use a riding mower for our six acres of land. I always enjoyed gardening and horticulture and decided to incorporate these activities in my exercise plan. I even began weeding by hand. I am now getting into running and am able to jog two miles. I have a final 20 pounds to lose by my 50th birthday at the end of May. I plan to run my first 5K at the end of 2013. I also cut my hair “shield” and donated 28 inches to Locks of Love.

I did this for me, but the benefits have been far-reaching. My husband has lost 45 pounds and now we both are setting good examples for our grandson. I am able to run and chase our grandson down our driveway now. He and I ride bikes together. We even climb our apple trees. We are able to go to the movies now, and I am able to fit in the seats and resist the popcorn! We rode our first roller coaster together. And I have a whole lot of lap now for him to cuddle on. Family and friends tell me that sometimes it is difficult to tell which one of us is the 6 year old. This small child I thought I had rescued has rescued me.