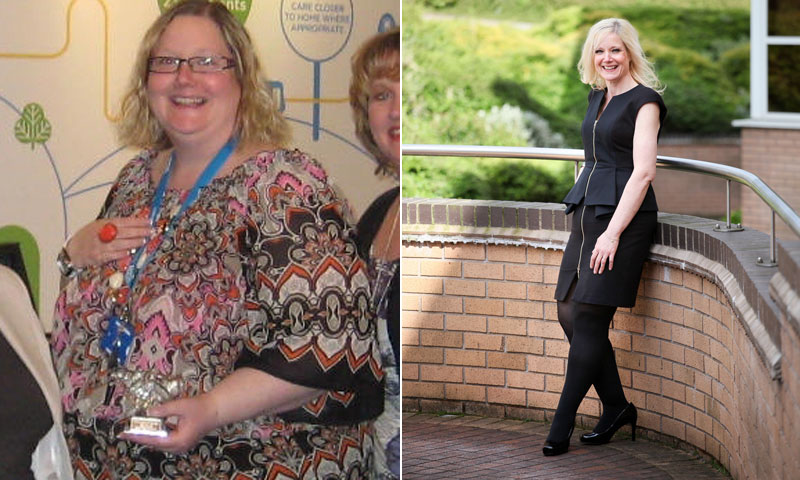 How I Gained It: I’d been overweight since childhood, and as I got older I started to gain more. Still, even embarrassing situations — like the time I cracked a bed at a tanning salon — didn’t motivate me to do something about it. It wasn’t until I became a mom 15 years ago that I seriously began to worry about my size. I hated the idea that I might be an embarrassment to my daughter or husband. They never said anything, and I know they loved me whatever my size, but I always worried about how my weight affected them. So I avoided school events like plays or parents’ nights, because I worried that other moms would think I’m a bad parent for being the size I was.

Breaking Point: I’d sort of accepted that being overweight was my fate. One of the breaking points was realizing that I believed my weight was going to be the thing that killed me — which is scary, looking back, because I was only 37. I’d go to bed at night and wonder if that might be the night I didn’t wake up. So in March 2010, I decided to try to change my fate.

How I Lost It: Two of my friends had joined Slimming World, a weight-loss program that originated in the UK but is now available online across America. My friends were having success with it, so I decided to join, too. Still, I kept it a secret from everyone at first because I didn’t know if it would work or not.

The eating plan did work for me, though. As I lost weight, I was still able to satisfy my appetite on foods such as fruits, vegetables, lean meats, fish, even pasta and potatoes. I started swapping takeout food for meals I made at home, cooked in healthy ways. A family favorite now is salmon with a baked potato and vegetables, whereas before I would have had high-calorie Chinese food or fried chicken.

I’m not on a diet — I just eat healthy now. I’ve got a completely different relationship with food. It doesn’t feel like a battle anymore; if I want a treat I’ll have it, but I’ve discovered that a lot of times, you only want it because you think you can’t or shouldn’t.

What also worked for me on this plan was the level of support I felt at all stages. Even during weeks when I didn’t lose anything or even gained, I never felt like giving up because of the constant encouragement. They believed in me, so I was better able to believe in myself that I could do it.

As for exercise, before I couldn’t even walk very far without getting out of breath. But as I started losing weight, I also began walking and even horseback riding with my daughter. I feel like she missed out on some things because of my weight, so I’m making up for lost time now.

RELATED:   Her Children Motivated Her to Lose 104 Pounds by Walking!

I’m still getting used to the changes -– someone recently described me as a cougar, and I couldn’t believe they meant me! Life really has begun at 40. Before, I’d go to bed and worry about whether I’d wake up or not, but now I find it hard to sleep because I’m thinking about all of the exciting things I have planned for the future.