Men Before And After Weight Loss: Shawn Commits To Running Every Day And Loses 115 Pounds 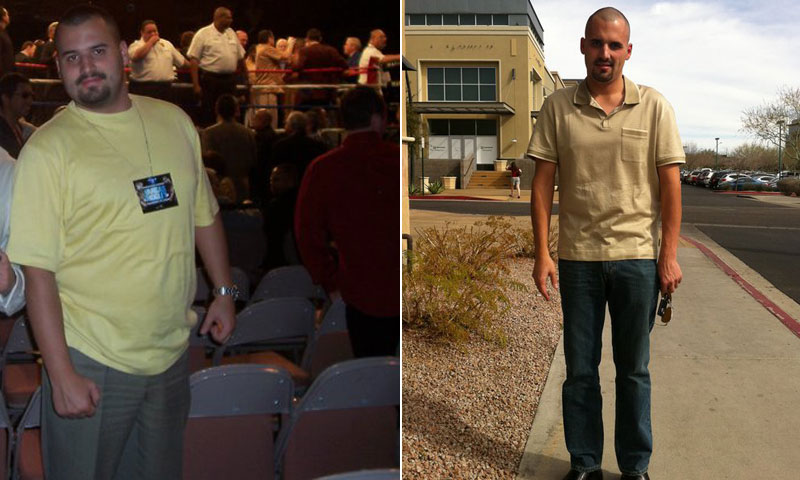 How I Gained It: I was heavy as a child, but I joined the army and lost a lot of weight in basic training. I kept a lot of it off, but I got married in 2003 and slowly started to gain. I ate out almost every day, including lots of red meat and starches. I had steak dinner three times a week and alcohol almost daily. I started to have health issues like sleep apnea, shortness of breath, heart palpitations and excessive sweating. I went to several doctors and was starting to get prescriptions for my ailments, but realized my weight was the issue.

Breaking Point: On Dec 31, 2010, I went out with friends and decided right then that my New Year’s resolution was to lose weight and be healthy.

How I Lost It: Starting January 1, 2011, I ran six miles a day. At first, I did three miles in the morning and three in the evening. About three weeks in, I had burned through a pair of running shoes and my knees hurt a lot. I went to a local specialist to get fitted for new shoes with insoles and my pain went away.

I also started a low-calorie, high-protein diet. I put together my own diet plan from all the more popular diets on the Internet these days. I had four ounces of chicken or fish at lunch and dinner, and a salad at dinner. Lots of water, green tea in the morning and alcohol only on occasion. Ninety days later, I weighed 175 pounds.

Now, I am enjoying a healthy life with no more sleep apnea or any other issues I had when I was heavier. I have three children, and we don’t indulge in junk foods or candy or anything really unhealthy except on some special occasions! It’s been almost two years now, and I’m still keeping 100-plus pounds off.