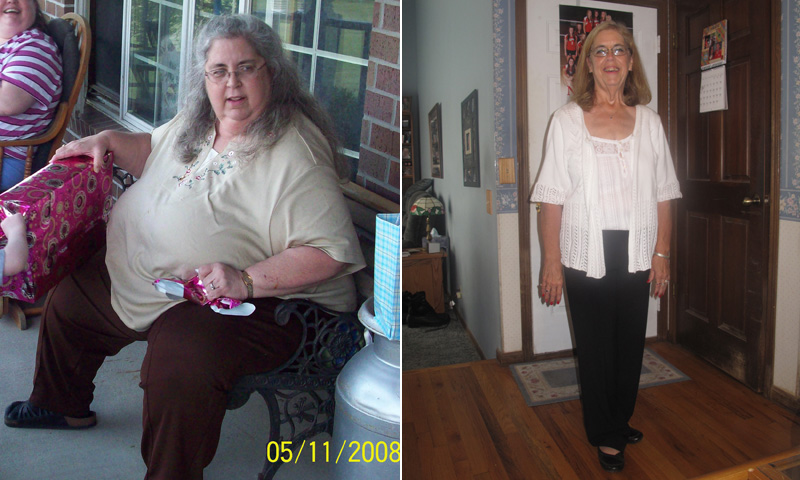 How I Gained It: I love food and am definitely a food addict. It is the only thing I am addicted to, but I can certainly sympathize with those who are addicted to cigarettes, gambling or drugs. I know I will be an addict forever, I can’t be cured, but hopefully I can learn to handle my compulsions. For 30 years, from the time I was 30, I ate anything and everything I wanted in vast quantities. I especially love carbs, like potatoes (and potato chips are still probably the hardest thing for me to resist), and sweets (cookies, cake and candy).

I have actually fought my weight for most of my life. I remember cinching the belt tighter on a beautiful hand sewn dress my mother made me to wear to school, when I was only 8 years old, in an attempt to look slimmer. But I didn’t become morbidly obese until several years after I got married. I had a few successful attempts at weight loss during my 20s, even lost 100 pounds when I was 29, and the year I turned 30 I was at an almost normal weight — for about five minutes. Then I gained it all back, plus more. For the next 30 years I remained morbidly obese, peaking at 328 pounds when I was 58.

I set no limits on my eating and justified it by saying I was overweight already, why bother watching the calories I was consuming now? I moved very little. I had a kitchen chair that had rollers on it, and as much as possible I would remain seated while I cooked and cleaned up, rolling all over the kitchen. I couldn’t stand very long before my knees and hips started hurting. Simply walking across the room left me winded and my heart would race. My joints were arthritic and the weight on them didn’t help that condition, in fact probably contributed to it.

Breaking Point: In December of 2009, my doctor told me that my EKG seemed to show I had had a heart attack. He administered the test after I complained that my heart would pound and race after the slightest exertion. Of course, since I weighed 328 pounds, that was understandable! I feared I had done irreparable damage, but still started a pursuit to drop just a few pounds and try to get healthier. Subsequent tests with a cardiologist proved my doctor wrong and my heart was still okay. But I knew unless I continued making changes in my lifestyle, that wouldn’t be the case forever.

How I Lost It: In March of 2010, I found Sparkpeople.com. This online weight loss community has been a real life-saver for me. I blog regularly there and read and comment on other blogs. The site has many great recipes and so many motivational tools to keep you inspired and living right. I religiously tracked my calories and also began a walking routine the same month I discovered this marvelous weight loss tool. I was still weighing in at close to 300 pounds, so walking wasn’t easy, but I persevered. Every day I would go just a little further, after only making it to the end of my fairly-long driveway the first day. I remember the day I made it one whole mile! I felt like Rocky and still call that spot at the end of my country road, my “Rocky Moment.” His theme song plays in my head whenever I reach that spot, even though today I keep going, and routinely walk 5Ks.

I set interim goals for myself. I wanted to be in the 240s for a friend’s wedding in June of 2010 and in the 220s by my 40th wedding anniversary in September of that year. I made both goals. Finally I decided I wanted to weigh less than 200 pounds by my 60th birthday on Jan. 1, 2011. I made it with a couple months to spare, reaching 198.6 on Nov. 3, 2010. What a day that was! Reaching “Onederland” felt like I had finally entered the world of normalcy, after 30 years of morbid obesity.

On April 15, 2011, I hit my goal weight of 160. I officially weighed less than half my starting weight. Since that time I have lost an additional 10 pounds, and weigh in around 150 most days. If I see the scale inching upwards, I cut back on my food, and increase my walking.

I am vigilant about everything that goes in my mouth. I will have to remain vigilant for the rest of my life in order to keep the weight off and that is a constant struggle, sometimes moment to moment. I eat a lot of fruit, which I love. I have also upped my consumption of vegetables, with lots of salads, always with low-fat dressing. We recently bought a grill basket and I have discovered if I cut up assorted veggies and marinate them in some balsamic vinegar and grill them, they are delicious. We cooked some shrimp, mushrooms and broccoli that way and it tasted like steak! I eat lean red meat and a lot of fish and chicken. I have started cooking more healthy things for my family, like homemade pizza, with very thin crust, lots of veggies and limited cheese on top.

I never eat anything fried, or coated with breading. I don’t eat my beloved potato chips, and I very rarely eat anything like cake, cookies or donuts. I have found some delicious low-fat dark chocolate candy, but try to keep my consumption of that to a minimum. Dark chocolate can be good for you in limited quantities. The limited part is what is hard with me and chocolate!

With severe arthritis in almost every one of my joints (probably partly caused by my obesity all those years), I can’t do much else than walking, although I have done some biking, which I love, and also some water aerobics. Most of my weight loss is attributable to watching my calorie intake, however. I have maintained my new weight for almost 15 months. I won’t say it’s not a struggle and a challenge every day of my life, because I will always be a food addict, but when I consider all I have gained back in my life, it is well worth the effort. I have so much more energy now, and the freedom to do whatever I want. I have even begun doing some substitute teaching, a job I trained for when I graduated from college in 1974, but was always afraid to try, fearing the ridicule from students because of my obesity.

It is never too late to make a change in your life. I started out, just wanting to get healthier, but along the way, discovered so many wonderful things in this world that I had shut myself off from because I was too fat to attempt them.