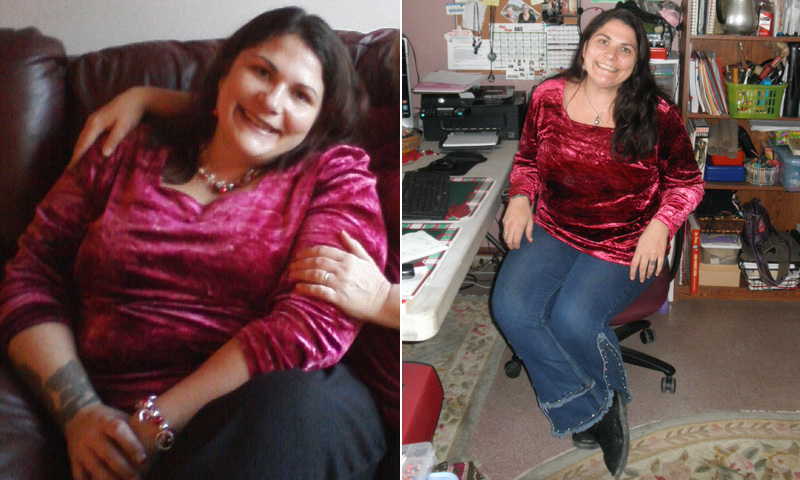 How I Gained It: I have always thought of myself as fat, even when I wasn’t. I believe I became a chronic overeater as a child but was active enough that it didn’t really show until my early 30s. As the years went by, I kept gaining — from eating, of course. I could tell you that I have had a hard life and there was no other known way for me to cope. Well, my life wasn’t easy, but I knew what I was doing when I had those second lunches and those snacks after my second helpings at dinner. Even during my pregnancies, doctors warned me that I was gaining too much. I could tell you that I lost a child when he was 2 years old, and that I didn’t want to live after or about the other addictions that I have fought over the years. But while some of these things may have been contributing factors, none of them is a valid enough excuse for the sheer volume of food I pushed into my mouth on a daily basis. I ate whatever I wanted, whenever I wanted. When no one was around to witness it, I could eat an entire family size bag of chips or a whole cake. I would feel such shame when I did these things, but I had no idea hot o stop. I would belittle myself all the time, but that made my eating worse. To me now, they were all self-destructive patterns that led me to my breaking point.

As if all of that wasn’t enough to help me become obese, a grapefruit-sized tumor was found on my right ovary. In September 2010, I had an emergency hysterectomy. After that, I really ballooned up. I was no longer active enough to burn any of the massive calories I was eating. I sat in my computer chair for as many hours a day as I could get away with, hiding from life and eating. With the weight and shame came depression, fatigue, insecurities and at times thoughts of just giving up on life all together. I didn’t want to leave my home. My hands would shake as I reached for the front door knob. I didn’t want people to see me like that.

I knew that the pain in my knee was not really from an old injury but from weight. A horrible burning in my stomach began; a trip to the doctor told me I had acid reflux. I felt that the depression was worsening and began to realize that if I didn’t do something soon I would be dead, be it from diabetes, heart failure or my own hand. I was on the fast track to my own demise.

Breaking Point: I read about a new diet drug being approved by the FDA, and even though I knew it would be a terrible mistake for me to take a drug, I became excited that maybe it was my answer. I knew that even if the claims of the drug company were true, a pill wouldn’t be the answer for me, but I knew I needed to do something, and quickly.

At the bottom of one of the articles about the drug was a comment by William Anderson. I followed a link to his website and spent hours reading his blog and about his book, “The Anderson Method.” I felt something I hadn’t felt in quite sometime: hope.

How I Lost It: I first found “The Anderson Method” on March 23, 2012. My body and my life have changed tremendously since. I have lost almost 80 pounds and I am not done — I am trying to reach my goal of losing 180 pounds.

I document every thing I eat. I can eat the foods I like and still lose weight, but I find that I can eat more food when it is mostly fruits and vegetables. Two weekends per month I indulge in my favorites like pizza or Buffalo wings, but I only have a little instead of eating until I feel like I am going to explode, then waiting an hour before going back for more. I also have quit drinking soft drinks entirely. I enjoy coffee with fat-free creamer and a small amount of sugar and water.

One of the points I found on William Anderson’s website was that I didn’t need to exercise to lose weight. When I first discovered his plan, I was barely able to get myself out of bed each morning. I sincerely doubted that I would be able to work out. I did lose weight simply following the directions in his wonderful book. But after losing more than 60 pounds I began working up a sweat each day on my Wii Fit. After a few months of slowly becoming used to moving more, I sought out an exercise program. I joined an accountability website, was assigned a coach and soon after was invited into a fitness group that I love on Facebook. Every day I am a little better than I was the day before.

RELATED:   Weight Loss Before and After: I Quit Smoking And Dropped 65 Pounds!

Beginning to exercise was really pretty scary. I started off very slowly and gradually increased the exercises that I would do on the Wii Fit until finally I was maxing out on everything and clicking the “do it twice” button. Then one day my eye was caught by the Insanity infomercial. I was amazed by the results shown and wondered if I could do it. Later that same week, I noticed that a friend’s status on Facebook was about one of the Insanity workouts. I sent her a private message, and she responded with such wonderful information that I decided to give it a try. After about 35 minutes into my first Insanity workout, I got sick. But I completed the 63-day challenge in December and am extremely proud of myself. I stuck to it and pushed myself harder physically than I have ever pushed before.