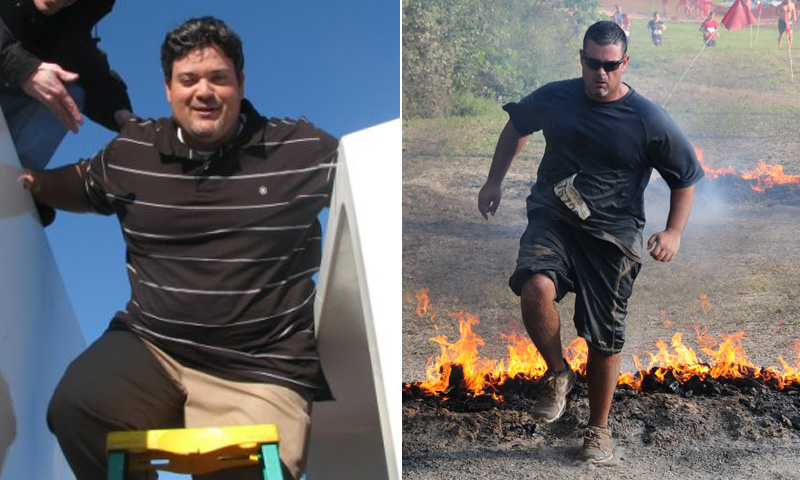 How I Gained It: I’d always fought my weight as a kid growing up, but after high school and early into my career I managed to lose most of it and keep in pretty good shape. Right around the time I turned 26 I got a new job in another city, met my first wife and all of a sudden I had put on 30 pounds. I chalked it up to having less time to work out with a new family and job, and didn’t worry about it.

All of a sudden, a few years pass, and I’m 30. I’m at another job with more stress, I’ve divorced and remarried and I’ve got a child of my own, plus step-kids — and I weigh 325 pounds, heavier than I’d ever been. I hated looking at myself in the mirror. I don’t think it’s that I ate things that were bad for you, it’s that I ate way too much of everything. A slice of pizza would be a whole pizza. One donut or bagel would be a dozen. I literally couldn’t stop myself from eating too much of everything.

Breaking Point: The year 2011 wasn’t a good one for me. My second marriage had fallen apart and later in the year my father died. I was getting back into the dating world. I felt miserable about how I looked, and it was affecting how I felt about myself. I had zero energy for my son, no energy to work the long hours I needed to and, at 32, I knew if I didn’t change I wouldn’t make it to 40. On June 23, 2011, I committed to changing my life forever.

How I Lost It: I knew that to lose weight you had to do two things; exercise more and eat less. I started doing P90X daily and I did Weight Watchers online to keep my food intake in check. I’ve basically lost a pound or two a week — sometimes more, sometimes less — for the last year and a half.

At first, exercising was depressing. When I was younger and in better shape I was a runner and lifted weights daily. The first day I did P90X, I couldn’t do one pushup. I just kept doing a little better every week. Eventually, I began to look forward to it, and now I can’t imagine starting my day without a workout. I started running seriously a few months ago, and I hope to complete my first half-marathon in February.

Once I got portion sizes under control, I started eating cleaner. I don’t eat very much red meat anymore. I don’t eat large portions of white bread or pasta. It’s all multigrain and lean chicken or turkey. I’ve never been a big vegetable guy, but I eat a lot of fruit daily and enough vegetables to fill me up. I rarely eat fast food, and when I do eat out I’m careful.

Now, I look forward to doing something athletic every day. I feel like I’m making up for the lost six years I spent weighing over 300 pounds. I feel like I’m in control of my life again. Exercise has helped bring me through a tough couple of years, and I am stronger both mentally and physically than I was before.