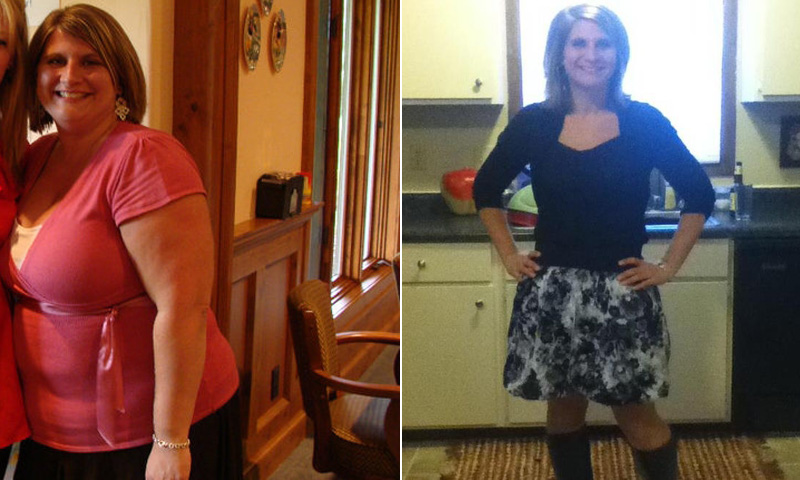 How I Gained It: I have struggled with my weight since I had my daughters. I realize now that I did get lazy and fell into bad eating habits and no exercise. Some people can live like that and stay thin, but not me. I gave up on myself and lost control. I was an emotional eater and found that filling myself with food was a temporary fix. Of course, it was never truly satisfying.

Breaking Point: For years, I had been struggling with physical intimacy in my marriage. One night while we were in bed, as I lay there crying because he wouldn’t touch me, I finally asked my husband why. I asked if it was because of my weight, and he said yes. My heart broke. I was ashamed, embarrassed, furious, sick, disgusted with myself. So, without him knowing, I began a mission.

How I Lost It: I started eating differently. I stopped snacking, drank a lot of water (cut out all other drinks, except for my sugar-free mochas!), had a light breakfast and lunch and ate portion-controlled dinner with my girls. I ate whatever I made for them, I still do not make separate meals.

Then I began the Couch to 5K program. It was hard! I would watch the seconds tick away until I would be done. I never thought I would be able to run for 30 minutes straight!

After about two months, I had lost 40 pounds. My husband never noticed. At that point, I didn’t think it was my weight after all; but now I was on a mission. I wasn’t going to do this for him anymore. I was doing it for myself and for my daughters.

RELATED:   Weight Loss Before and After: Mother And Daughter Team, Kathy And Emily Lose 53 Pounds Each!

I finished the Couch to 5K program, added some weight training and ran my first race. In the meantime, I filed for divorce. I continued to eat healthy and run and on February 4, 2011, I met my first goal of losing 90 pounds.

I continued to lose weight, but slower. I did a Dirty Girl mud run in August 2012, and doing that motivated me to finish what I started. I had put on 10 pounds since February 2012 and wanted to get down to 145 pounds. I started a 12-week Biggest Loser-style competition on Facebook with 12 other people. I had also started dating someone who used to be a personal trainer who helped me with a workout schedule. During those 12 weeks I trained for my first duathalon, 10K and half-marathon. I ran, biked and started doing Zumba.

I had never exercised in a group before. I had wanted to try it, but didn’t want people to see me doing it. I’m so glad I did, because it is so much fun! I ran mostly on my treadmill, but then got bored with it. I also did not like the fact that people could see me running. Funny thing is, I started seeing people around town who would tell me they’d seen me running and how they wished they would get outside to exercise!

RELATED:   I Lost 70 Pounds: Denise Is In The Best Shape Of Her Life!

My vigorous training schedule helped me get to 145 pounds, and I won the Biggest Loser Facebook competition!

This journey has been about so much more than just losing weight. As the weight started to come off, I started to feel lighter. Not just physically, but emotionally. There was a lot of built up anger towards my ex-husband and as the pounds shed, so did the anger. I could feel myself walking taller, my head up higher and not hiding myself under the weight. As people began to notice, I received such positive feedback that it only motivated me more.

I want to be a role model for my daughters. They know that I eat healthy and that I exercise. I want this to be instilled in them so that they don’t live through some of the struggles I had. I will weigh myself every week for the rest of my life. I have to. This keeps me in check. I am happy with my body for the first time in my life. I never want to ruin that. My life has been one hell of a race!

Current Weight: 140 pounds. I only have five pounds to go to reach my goal of 135 pounds.