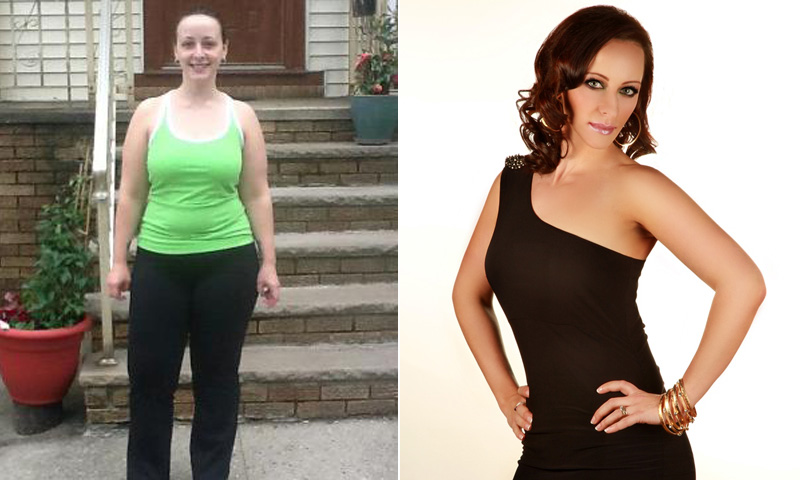 How I Gained It: After giving birth to my daughter, I suffered from postpartum depression. To make matters worse, I was laid off from my job the same week I returned from my maternity leave. I felt like I was failing at motherhood and became even more depressed when I could no longer contribute financially to our household. I was out of work for six months, and they happened to be the coldest months of the year, so we were often stuck inside. We had moved to a new town, and I didn’t know anyone yet, so my days were spent alone in the house with my colicky baby. I would pretty much eat my way through each day, counting down the hours until my husband would come home. Instead of seeking help, I tried to hide what I perceived as “weakness” and suffered silently for over two years.

Breaking Point: After eventually seeking treatment for my PPD, I began to heal mentally, but physically I was still a mess. I was in pain every day, had begun to suffer from some gastrointestinal issues and just generally felt terrible. My breaking point was January 23, 2012. That was the day I stood on the scale and weighed as much as I did when I was nine months pregnant with my daughter. Then and there, I knew it was time to change.

How I Lost It: I signed up for Weight Watchers that day and began tracking everything I ate and drank. I went to meetings and got some great ideas for snacks and meals. At the same time I joined my local gym, but I was completely overwhelmed and intimidated on my first day. My friend and I began hitting the gym together and eventually we got up the nerve to try some classes. We started with Zumba and stood in the back where no one would see us. We both loved the class, and that kept us coming back for more every week. Once we were more comfortable with Zumba, we decided to try other classes like BODYCOMBAT, BODYPUMP, BODYATTACK, RPM and CXWORX. I fell in love with all of the classes and reached the point where I actually looked forward to going to the gym every day.

RELATED:   Weight Loss Before and After: Elaine Drops 183 Pounds And Finds A New Self

My gym started a weight-loss challenge last April, and my husband and I signed up right away. One of the perks for signing up was a free personal training session. When I had my first session, my trainer and I just clicked. He used to intimidate me when I took his classes, but one-on-one he was totally different. He saw something in me that I didn’t even see in myself. He believed in me and encouraged me from day one, and that changed my life. I began training with him twice a week after our free session, and we are still working together now. His confidence in me helped me rediscover the confidence that I used to have in myself, and before I knew it I had lost 20, then 50, now 70 pounds! In August, he told me that I should sign up for a group fitness instructor training program that was coming to our gym, and I looked at him like he was insane. He somehow talked me into it and although I was filled with self-doubt, I eventually checked my doubt at the door and became determined to pass the training … and I did! I am now a certified Les Mills CXWORX instructor, and I teach classes at the same gym where my journey began.

Having my husband by my side throughout this process has made such a difference as well. Before he joined me, I would feel a little guilty and try to limit my time at the gym so that I could get home to take care of my family. But when my husband got involved, we started to take advantage of the playroom at the gym so that my daughter could play while we worked out together. After taking one class, he would often suggest that we stay for another. He helped me step outside my comfort zone, and it was so much easier to do it with him by my side. He also became a certified group fitness instructor and lost nearly 50 pounds. My daughter loves going to the playroom at the gym and often begs me to go there every day (even on my rest days)! I love that we are doing this as a family because not only are we taking better care of ourselves, but we are also setting a much better example for our four-year-old daughter.

In the past year I have done things I never imagined I would do, and I look forward to doing more of the same in 2013. I even started a blog to share some of the lessons I’ve learned during my journey and motivation for others who are on a similar path. So what’s next? I’m just five pounds away from my goal weight, and my husband and I are looking forward to doing a Spartan Sprint, Super Spartan and maybe even the Tough Mudder later this year. If I had heard about these races a year ago, I would have said that there was no way I could do them. But this year I know that I can and I will!