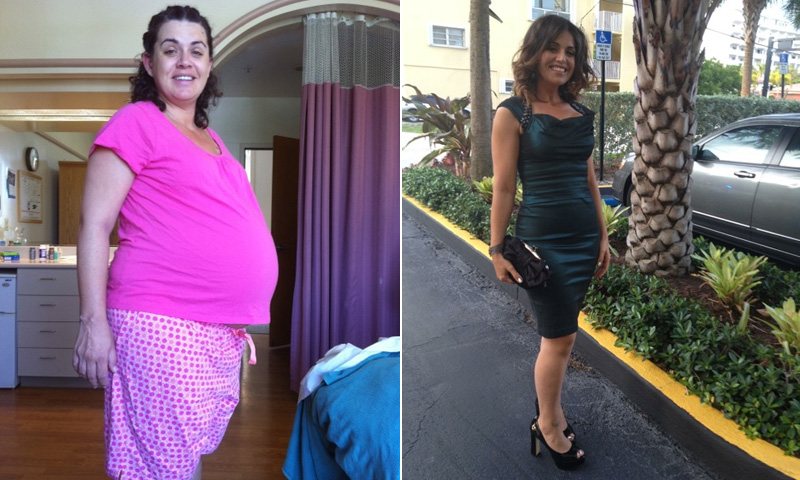 How I Gained It: I started gaining weight in my teenage years, and like many people, I tried diet after diet without results. I finally got to a point where I just accepted the fact that I was fat and that nothing I could do would change that. From that point on, I really started to gain weight. I moved from Brazil to the United States to try to further my singing career and in no time at all I doubled my weight, going from just plain old fat to super fat. I was a size 28 and was fine with it.

I’m not sure what happened but one day I made the decision to at least stop eating crap. I was tired of eating fast food and junk food, so I decided to eat healthier. Fried foods were replaced by baked and raw foods. I cut back on breads and made sure I ate plenty of vegetables and fish, chicken or meat for protein. I still ate like a starving bear in the wild, but I noticed that just through a healthier diet I was losing weight! I dropped 35 pounds quickly — at least that’s what the scale told me. I still felt fat and looked fat, but I could begin to see a floppiness in my skin. The next step I decided was to go to the gym and at least firm up where I had lost that weight. I tried the StairMaster, treadmill and Spinning, but I really didn’t know much about exercising. In the beginning it was very painful, but I felt good working out and I got thinner. Each week the scale gave me more confidence. I still missed my morning donuts and coffee but after two years of just eating healthier and exercising I lost 100 pounds. Then the roller coaster ride began.

A few years later I got married which was good for another 20 pounds. Then I got sick with breast cancer. I started eating more again to counter what happened during each week of chemotherapy and more weight came back. Once I became a breast cancer survivor, I became even more determined to lose the weight again and stay thin. But then, a year later I was pregnant with triplets, so I was eating for four. I gained more than 100 pounds during the pregnancy. On top of that, one week before I delivered, I found another lump in my breast — another reason to seek solace in food. The cancer was back.

Breaking Point: I delivered the babies (each under four pounds), had the cancer removed, went through radiation and beat cancer for a second time. Just after that, when I weighed in for my appointment with the oncologist, I was shocked to see 294 on the scale again.

How I Lost It: I wasn’t 25 years old anymore and that made the weight even more difficult to lose. Then a miracle life saver came into my life — the BodyMedia. I heard about it from a friend and immediately ordered one. I could track every morsel of food I ate, every minute of exercise and even whether I was getting a good night’s sleep. It was like having a doctor, nutritionist and personal trainer supporting me right there on my arm!

Each day I tried to burn more calories than I ate. I would also try to trick my metabolism by changing the amount of times that I would eat. One week, I would eat five small portions a day of vegetables, almonds, egg-white omelets, chicken and fish, and the next week I would eat bigger portions but three times a day. I included some plyometric exercises and different weight routines in my workouts this time around. The weight melted like butter on a hot summer day. It was absolutely amazing, and after about four months I had lost that 100 pounds again.

Then another event occurred that would affect my weight. I was selected as the Best Brazilian Female Singer living in the U.S. by the Brazilian International Press Awards. So I decided to lose another 20 pounds so I could get into the finest dress I could buy for the red carpet event before the awards ceremony. Now I am a healthy, cancer free, mother of triplets having the best time of my life — and in the best shape.