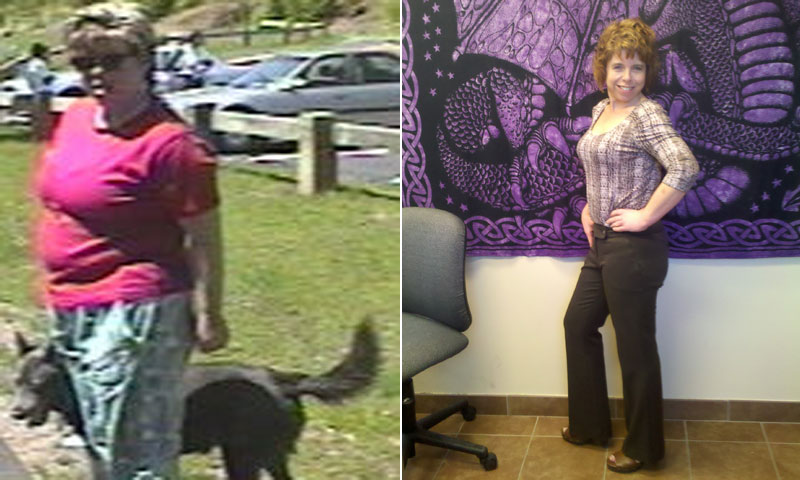 How I Gained It: It was easy to get fat — all I had to do was to eat out all the time. For breakfast, I would frequent Dunkin’ Donuts or McDonald’s for an egg sandwich with meat and cheese. I would go to lunch at Wendy’s or McDonald’s. I thought I was eating healthier, because I was eating a salad with croutons, cheese, a lot of dressing and a Diet Coke. I would end the day with a fancier restaurant like Outback Steakhouse, Olive Garden or The 99. I had no idea that these food choices were also bad for me. I didn’t know about counting calories or how much I should be eating.

Emotionally, I was a train wreck. I wanted to gain weight to be invisible to everybody. I was feeding my sadness and hurt instead of getting counseling for the rape that happened when I was 17 years old. Every time I went on a weight loss plan, I would start to get attention toward my body and put the weight back on.

There was no exercise in my life at all. I went to college and gained more weight. I got a degree, but it didn’t matter; I wanted to hide. I got married: time to gain more weight. My wedding dress was a size 20. I had two adorable children — let’s celebrate with more weight. At my heaviest after my daughter was born, I was 252 pounds. Both children have a lot of medical issues.

Breaking Point: My son had to have his leg broken in 2009 for hip dysplasia, and he was put in a full-body cast. He was 9 years old at the time. I was so heavy I couldn’t take care of him. I needed to get a full-time nurse’s aide to help me. I had had enough of asking for help. I was tired of being helpless and weak in every avenue of my life.

I was scheduled to go back to work on November 1, 2009, which was going to be the start of my new life. A friend told me about caloriecount.com. I started to cook at home. I measured everything that went into my mouth. I saved so much money by eating at home I bought a new car. About a week later, I walked into the gym around the corner from me and joined. There was no backing out now.

How I Lost It: I met this trainer named Mario Del Valle; he became my friend for life. He showed me I was worthy of being heard and seen. He’s a retired boxer with classes all over the local area. We would get into the ring to spar for a full minute. At first, I couldn’t last the minute. I now go three full minutes, plus exercises on the side. I finished my first 5K on August 11, 2011 in 36 minutes, which was amazing to me. I was about 175 pounds. I entered a Tough Mudder on May 6, 2012. I only made it nine miles before I got hurt, but it didn’t derail me because I now believed in myself for the first time in my life.

Shortly after that race, I got divorced. I moved into my own for the first time ever at 43. I’m in a great relationship. I’ve done a lot of other races. I am currently a size 2, very different then my size 20 wedding dress.