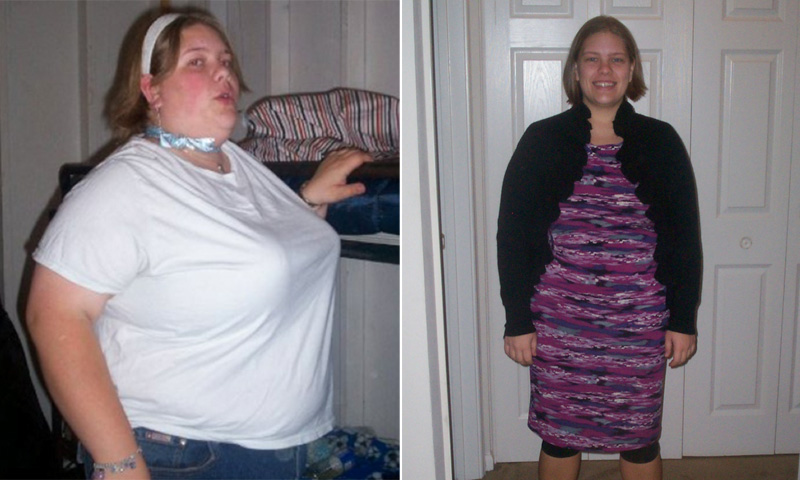 How I Gained It: I had always been big. I always knew I needed to lose weight, even in middle school. I weighed 250 pounds by eighth grade. I don’t think there is a specific reason why I gained all the weight; it was just me eating too much for years and not doing any kind of exercise to burn it off. I had tried to lose weight several times — using Weight Watchers, workout DVDs and the Atkins Diet — but I lost motivation. I went along with these programs because others convinced me to, or because I was dragged to meetings, but since it wasn’t me making the choice, I constantly cheated. Then, I lost two of my best friends to cancer within two years, which didn’t help me at all, since I was a very emotional eater.

Breaking Point: I always think back to my first few years of college, right before I decided to get serious about losing weight. I remember how lethargic I was, with energy only surfacing to go to the kitchen and fix myself a bowl of ice cream. I did everything that everyone else did; I just did it a lot slower and got tired quicker and more often than everyone around me did. I had these size 3X floral pattern shirts, which no one in their right mind should have worn, but they were the only things that fit me at the time. I didn’t have bras that fit which caused back pain. In 2009, I was finally sick of being huge. I wanted to become healthier, and along with that, I wanted to start losing weight. I wanted to be able to wear cuter clothes. I just wanted to change, period. My sister was a huge inspiration to me simply by becoming a runner. I wanted to be a runner, too; but it’s really hard to do that when you weigh almost 300 pounds. So, I also set a goal to complete the “Couch to 5K” program.

RELATED:   Weight Loss Before and After: Tracie Drops 130 Pounds By Facing Her Emotions Head-On

How I Lost It: My weight loss started with a New Year’s resolution, as so many do, when I started out with the Flat Belly Diet. Soon after, when I was looking on the Internet for various healthy lifestyle tips, I found SparkPeople.com. After only a few weeks using SparkPeople, I could tell that this was the site for me. I replaced ice cream with fruit, and fried potatoes with salad. Just counting the calories and seeing what I was eating was enough to keep me on track. I was still eating meat at the time, however not for long. While eating a meal with chicken, I bit down on a piece of bone, and that was it for me and meat. That was a large turning point in my diet. My parents are vegetarians, so I’m not a stranger to tofu, but it was still an adjustment. I also started walking. First, I walked to classes (I was in college at the time), then I added in about 15 to 20 minutes of walking in the evenings, which then increased to hour long walks almost every day.

Next, I started running by doing the Couch to 5K program. The first time I tried it, I couldn’t even do the first workout of the plan! I had to adjust it and do 30 seconds of running with two minutes of walking. I called it my “pre-week 1 workout.” Little by little, I began to make progress. I set small goals and set out to achieve them. I didn’t change my lifestyle drastically all at once. I just changed small things so that it wouldn’t be such a culture shock. Now, with more than 100 pounds lost, I can run a 5K or even a half-marathon!

RELATED:   Weight Loss Before and After: Anna Cuts 75 Pounds By Eating Whole Foods

I feel so much better now! I now find myself wanting to work out. Who knew that would ever happen? I enjoy cooking healthy meals. I enjoy grocery shopping because I get to look at all the foods I never noticed before. There are so many grains, fruits and vegetables that I never had eyes for before my weight loss. There are so many more activities that I can enjoy now that don’t involve eating — I can go swimming and play sports with people instead. I had carpal tunnel problems for years. It got so bad that during a semester in college, I had to stop playing my viola during orchestra rehearsal because my hands were completely asleep. However, after I lost a good portion of my weight, I never had problems with it again.

I maintain my success by tracking my food and fitness on SparkPeople daily and through the support of family members and the SparkPeople online community. My advice to others in keeping a successful New Year’s resolution would be: