I Lost Weight: Cathy Sheargold Wanted To Experience Life With Her Son And Lost Nearly 200 Pounds 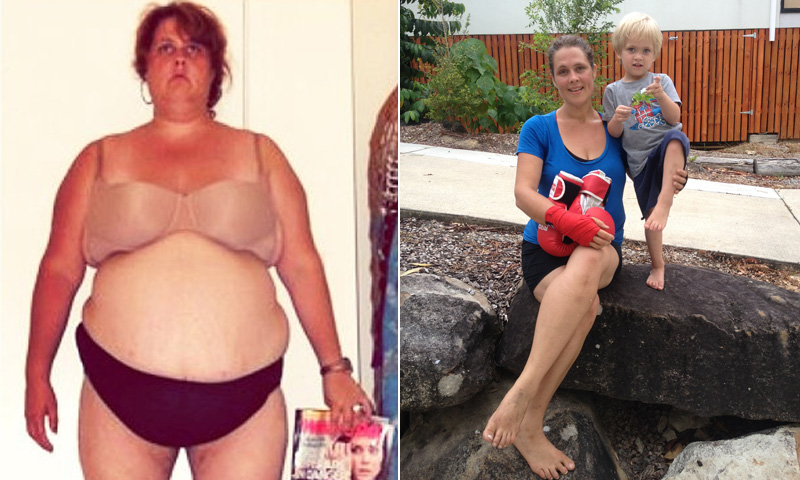 How I Gained It: I have always been the fat girl. The last time I was a healthy weight I was probably about 8 years old. I had become used to it and used to being unhappy with my body. I spent a lot of time wishing that I was lighter — and then I would binge on junk food, looking to get energy fast.

The problem is that the energy I would get didn’t last, so I would be reaching for more chocolate, chips, fried food and let’s not forget the doughy stuff. I was an “emotion eater,” and no, that’s not a typo. I call it an “emotion eater” because that describes what I did far more than an “emotional eater.” I ate my emotions instead of feeling them.

I was a secret eater. I would order 10 pieces of chicken and two large chips at the KFC drive-thru, and pretend I was ordering for a family. Then I would find a dark street and park and feed. I used to believe I loved food, but I didn’t, I used it as a weapon to punish myself.

Breaking Point: There have been a few embarrassing incidents: hearing a child say to their mother, “Look, that lady needs two seats,” breaking a chair, a friend telling me that when I was breastfeeding it looked like my son was a mosquito. At the end of 2011 my father had a pulmonary embolism. The doctors thought he might die. He didn’t, but this made me think about my own mortality. I woke up at night gasping for breath. Sitting and standing hurt. I gave myself five years, tops. I had given up.

But, here’s the thing: I’m a solo mum to a 2 year old. So, in five years he would be seven and an orphan. He would have to stand over my grave and that would have been his greatest memory of me. It was time to change.

How I Lost It: I found the Michelle Bridges 12 Week Body Transformation, an online program run by the trainer on the Australian version of “The Biggest Loser,” and the right program at the right time for me. I didn’t really think I could do it (I’d failed so many times before), so I got information about gastric banding too. The first week I drove to the gym and sat in my car thinking, “They’ll laugh at me, I’ll look silly, I might break the equipment, I won’t know what to do, I am too fat to be here, fat people don’t work out.” I went home, and this continued for the week.

That week, I also saw a friend that I had not seen for a very long time. The way he looked at me, I saw pity in his eyes. He watched me struggle to fit in behind the steering wheel of my car, he watched me sweat after walking up a small flight of stairs. He wanted to help me like an invalid. We went to lunch, but I went to McDonald’s on the way home.

And then I cried.

RELATED:   Weight Loss Before and After: Kathleen Lost 140 Pounds WIth Diet And Exercise

I decided to give Bridges a go. I started training six days a week and eating food that nourished me. I used to wear a Thomas The Tank Engine armband to the gym to remind me of why it was so important, and when it got really hard I would say to myself, “Seven, eight, 30.” That’s when my son will turn 21. I intend on doing everything in my power to make a speech and celebrate it with him.

The big thing I added to my diet is water. I drink about three liters a day, sometimes more depending on my training. And no more fast food binges for me. I’m very much about clean food. I read labels, and if there is something on the list that I can’t visualize, I don’t eat it. I use herbs and spices a lot more now, rather than oil and salt for flavor. It’s about nurture and nourish, not punish and deprive. I also had to learn how to dine rather than feed. I make eating an experience. I serve food every day like it’s for a dinner party, and drink my water from a wine glass.

I discovered that weight is just a reaction to life, so I make sure life is amazing. I eat fantastic food and always make sure that I never feel deprived or guilty. I have climbed mountains, competed in fun runs and obstacle courses, I do boxing training. More importantly, I am a better mother, my son doesn’t miss out on experiencing life because of me anymore. I can jump on a trampoline, take him on adventures. That’s the really special bit of all of this, how it has changed his life.