I Lost Weight: Carin Powell Lost 10 Pounds For A Job Opportunity, Then Kept On Losing 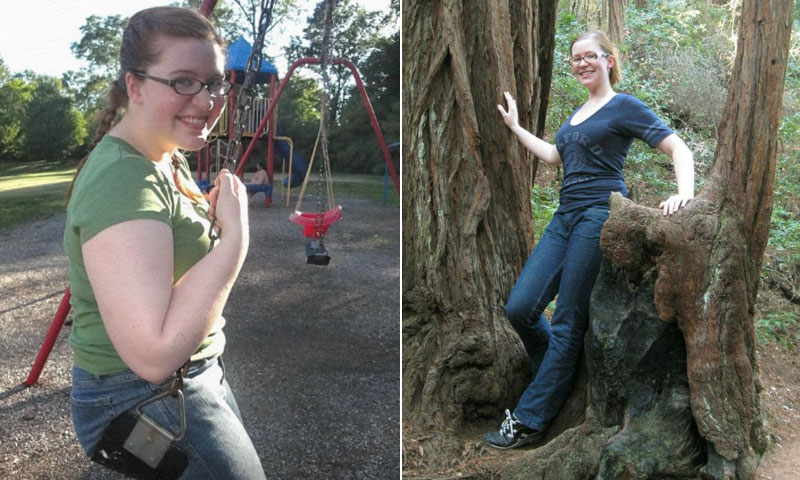 How I Gained It: It was a confluence of factors, but while a difficult medication regimen and a snail’s-pace metabolism certainly contributed, I would say the most damaging factor was unhealthy eating habits. I tended to eat impulsively and emotionally, rewarding myself for making it through a difficult day with my favorite foods. I wasn’t eating fast food or sugary things all the time, however, the quantity and portion size of my meals was the real problem. My husband is 6’4″ and has a decent metabolism, and for some reason it always surprised me that we weighed nearly the same, despite the fact that I would split up meals in equal portions for us both.

Breaking Point: When my breaking point came, I had already gotten married at my peak weight. I had resigned myself to the notion that this was just the way my body was, and since my husband liked the way I looked, I figured it shouldn’t matter what other people thought. I had given away the clothing I always kept around for when I was thin again. What started the ball rolling was an audition. I’m a classical musician, and good jobs are few and far between. The Coast Guard band had an opening, and since they offered health insurance and tuition assistance, I decided to go for it.

A month before the audition, I found out that the Coast Guard has a height-to-weight admission requirement, and furthermore, I was ten pounds over it. I had to lose the weight in order to have a chance at getting the job. My complacency with my body image couldn’t withstand my determination to get employed.

How I Lost It: The 10 pounds had to come off quickly, but I really didn’t want to use a crash diet or pills. Using the Cunningham equation, my husband figured out how many calories I was consuming per day to maintain my weight at my sedentary activity level, which was about 2,500, and then I cut my daily allowance by five hundred calories. The weight came off just in time for the audition, which I did not get. However, a month of doing something makes it into a habit, and I thought, if it worked for the first 10 pounds, why not keep going?

So I did. I thought of my calorie allowance like a monetary budget, and did my best to spend wisely, not blowing all of it on a big item like a cupcake or a pizza but eating a lot of things that didn’t “cost” much, like veggies, lean meats and fruit. I was cranky at first, but low-calorie foods helped me feel like I was at least getting fed, and it became much less difficult after a month or so. The key thing about counting the calories is that it wasn’t easy at first, but it was simple. I ended up averaging a loss of about 10 pounds per month, settling on a daily intake of 1,500 calories per day after my metabolism had adjusted to my previous allowance of 2,000.

After I lost 15 pounds, I started moving around more, taking walks and going on hikes. The loss informed the exercise because simply climbing stairs had hurt my joints and tired me out before. Once I lost 15 pounds, it was like putting down a bag of groceries or taking off a pair of heavy boots. I felt lighter, and I hurt less, so getting out and walking more was a matter of pleasure rather than obligation. That summer, I climbed the highest peak in my state and hiked all over New Hampshire with my family. It felt like I’d gotten a superpower, and for the first time, I was always pleasantly surprised by how I looked in the mirror. It’s been two years since I reached my goal, and aside from normal two- to three-pound fluctuations, I’ve stayed the same weight.

I have my husband to thank for helping me with this weight loss. Having an ally, someone to vent to, was invaluable. Because he never made me feel like he needed me to lose weight so he could be attracted to me, it made this loss something that I was doing for me, not for anyone else. If you’re undertaking this journey, do it for you and you alone. Find out what incredible things you can do.