Male Before And After Weight Loss: Brad SHeds 200 Pounds With Sustainable Diet Plan 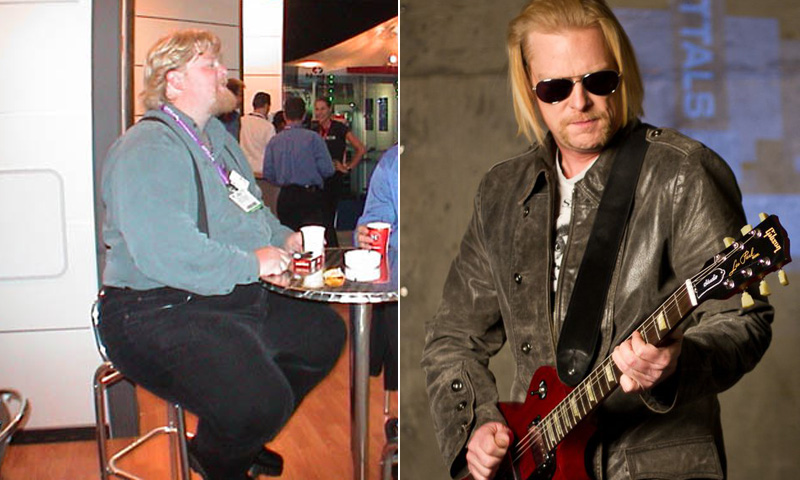 How I Gained It: There were a number of factors that contributed to my weight gain, but ultimately, it comes down to environment. I believe that we live in a world that is not often conducive to healthy lifestyles.

I specifically am a film editor, which by nature lends itself to a very sedentary situation. Hours of sitting at a desk, snacking and the associated unhealthy sleep patterns started to take a serious toll. Like many, in my early 20s, I could get away with this assault on my body without realizing the long-term damage. I used my lifestyle to justify the habits I was forming.

I ate irresponsibly. I consumed lots of soda and its empty calories, junk food and food very low in fiber. I was stuffing my body with food that wasn’t doing me any good. Over-eating led to weight gain, lack of mobility, low energy, high blood pressure, poor body functions and then ultimately type 2 diabetes and erectile dysfunction (ED), all by age 39.

I was also dealing with depression. The company I worked for had been purchased, and the stress of knowing it was going to happen and the depression thereafter fueled the emotional desire to use food as comfort.

Perhaps the most depressing fact is that I knew better. I was doing this to myself. No one ever forced me to eat anything or to not exercise. It was all on me. Worse yet was that in high school I had lost significant weight after my father died, so I knew what to do. I already knew how to lose weight, yet I wasn’t doing it. I was failing myself. I was living in an unhealthy environment — my own body.

I can vaguely remember a moment where I didn’t know that I wanted a different life. Was it 10, 15, maybe even 20 years that I knew inside that I was not treating my body well? I was doing things that would have a cost, yet I did them anyway. We tend to do what we do; we tend not to change. I could see how Newton’s law applied to me.

In the fall of 2003, after moving back to Alaska, I became very sick. I was still smoking cigarettes at the time, weighed more than 433 pounds and felt like I really was at an end. I could hardly move. I was at the point where I seriously considered using a mobility cart when I went shopping. The road to recovery was going to be arduous.

I joined a local gym that offered water aerobics. At age 34, I was in a pool, the only man, with women all over 60, and I couldn’t keep up. This was serious! I went a second time, and a new path was set in motion. After about one full month of going to classes and once I started to move better, I decided to step on the scale: 433 pounds. To this day, I do not know, nor does it matter, how big I ultimately became. I had made a choice to go in a new direction.

How I Lost It: For two years, I was there every session. I started going to the gym on my own, working out in the pool, even running in the pool to keep the impact low on my joints and increase stamina. I got down to 360 pounds this way and had made a major shift. Then, due to a financial challenge, I had to stop going to the gym. I managed to hold on at 360 pounds, but had plateaued without the exercise or changes to my diet. I hit the wall.

I have a good friend that had success losing weight via a medically supervised program at Alaska Premier Health (APH). He mentioned that the same program could help me lose the rest of my weight. I called the folks at APH and scheduled an appointment — which I skipped!

As mentioned earlier, I lost my father to cancer when I was 13. This left me with a bitter resentment of the medical profession. I had not been to a doctor since high school. I was terrified, and as a result, did not go to my first appointment. After a few days, they called me to reassure me that I was not the first to do so. They encouraged me to come in and talk. It was enough humanity at the precise moment I needed it that I chose to go in and give it a shot.

As feared, it took several attempts to draw blood on that first visit. Having not exercised at all since water aerobics, I had quickly slipped back into poor health. I was put on a plan that clearly explained when and how much to eat. My next appointment was set for two weeks, and they added that they would call sooner if there were any issues with my blood work.

At 8 a.m. the next day my phone rang. “Brad, we need to see you right away.” I was scared, and when I went in to face the music, they told me I had high blood pressure, high cholesterol and Type 2 diabetes. I was a walking time bomb. It wasn’t serious, it was critical! I was put on prescription diabetes medication. The team reassured me that we could do this, if I could get focused. So I did.

It was to be a total approach, eat less, move more. APH had also put me in contact with Body Renew Alaska for help staying focused with exercise. Body Renew placed me with Michele Deckard as my trainer. Our first night working together, it took 30 whole minutes to do three floor exercises, and I mean barely. As Michele walked away I heard her say under her breathe, “I don’t know about this.” She was right to question, as I was in bad shape.

Despite any obstacle, we moved forward. APH, Body Renew and I had teamed up and the results were starting to show. As the diet progressed, APH added more diversity to the foods I could enjoy. I really learned to love my veggies when I used to skip them. The workouts with Michele allowed me to lose the weight, retain good skin tone and amazing new levels of fitness and stamina. The diet and exercise changed my life. It was about a nine-month journey to get down to my current weight. When I reflect on how long I had lived poorly and treated my body with such disrespect, I recognize it as an absolute miracle that I reclaimed my health so quickly.

I now live in a healthy environment, my body. I have learned that everything happens from within; joy, sorrow, happiness, pain and love are created by me, from what I carry with me and from where I put my focus and intention. Every aspect of my life has improved; energy, health, appearance, confidence. The way people look at and respond to me is completely new.

Following the weight loss, I began dealing with a new set of challenges; dealing with how my world had changed. I realized how easy it was to feel anger about being treated different now due to my new appearance. I also realized that there was much more to that story than my anger could fathom. It was here I learned about “self-loathing” and how when we see something that reminds us of something we don’t like in ourselves, it often manifests in our interactions. I have changed in this process, and can now see that as I became more confident, I became more attractive to people through my actions. The way I carry myself now reflects more than my appearance ever could alone.

Since the weight loss, and dealing with these strong personal challenges, I am now better equipped than ever to deal with all of life’s challenges; physically, mentally and emotionally. When we start with a strong environment everything else is easier.

I have talked to many people during my transformation, some have gone on to lose weight, some have not. Some have met barriers such as a fear of giving up a favorite food or habit. I am reminded of the quote by Henry Ford, “Whether you believe you can do a thing or not, you are right.”

I believe anyone can. I believe, because I am proof. I encourage everyone to prove it to themselves.

Related Items100 Pounds LostmenOver 100 Pounds LostrunningSEO
← Previous Story Men Before And After Weight Loss: Chris Drops 97 Pounds To Be There For His Son
Next Story → How I Lost 280 Pounds: Walking And Swimming Helped Daniel Lose The Weight