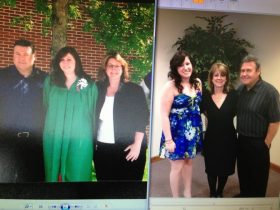 Real Weight Loss Success Stories: I Lost 97 Pounds And Am Continuing To Lose

How I Gained It: I’ve always had an appetite. I started really gaining weight in seventh grade when I was able to make my own food choices — and did so poorly. I was also into sports, especially football, and I needed to get bigger to play on the offensive line. Once I got to college, I was told that I needed to be 300 pounds to compete for a position.

Breaking Point: During the fall semester of my sophomore year of college at Millikin University in Decatur, Ill., I felt lightheaded after climbing three flights of stairs and started sweating profusely. Something snapped. I went back to my room and didn’t want to come out. I spent the next few antisocial weeks drinking Southern Comfort and playing video games. Finally fed up, I swore that during the spring semester I would rebel against my current way of living. By the time I graduated college, I was going to end up being 250 pounds, not 350.

How I Lost It: I started the spring semester by changing my eating habits. I stayed away from the all-you-can-eat dining hall on campus and learned to rely on my willpower when it came time to eat. It’s not difficult to find out what is and is not healthy for you, and you can train your taste buds to enjoy vegetables. My grilled chicken salads every day for lunch were a great reminder that long-term satisfaction came from feeling good about myself, not from eating an entire pizza.

The summer between sophomore and junior year I quit the football team and started running the one-mile loop around my hometown’s middle school. When it came time for me to go back to Millikin, I could complete the loop three consecutive times without stopping and had lost 35 pounds in the process. I had proven to myself that I could change; like He-Man, I had the friggin’ power.

By the time I graduated in 2004, I was down to 230 pounds, roughly 75 pounds from my heaviest. I started teaching high school English and coaching football and track in Watseka, Ill., and that same year I ran my first 5K. I was hooked immediately. I began running small races around the Midwest whenever I could, and by the end of my first year teaching, I had run a 5:48 mile and a sub 20-minute 5K. I was also down to 215 pounds. I read about what competitive runners ate and how they trained and coordinated most of my vacations around races.

It’s been more than 10 years since I started, and I still have kept most of the weight off. My wife Meredith and I love buffalo wings and microbrews, but we still compete in races. I hope to run my first marathon in November. I have learned to balance my health and my life. It’s not extraordinary. It’s not impossible. It’s a daily affirmation that you will eat well, exercise, and work to make this day better than the last. I’m living proof.