Male Before And After Weight Loss: Anthony Falls In Love With Running And Loses 105 Pounds 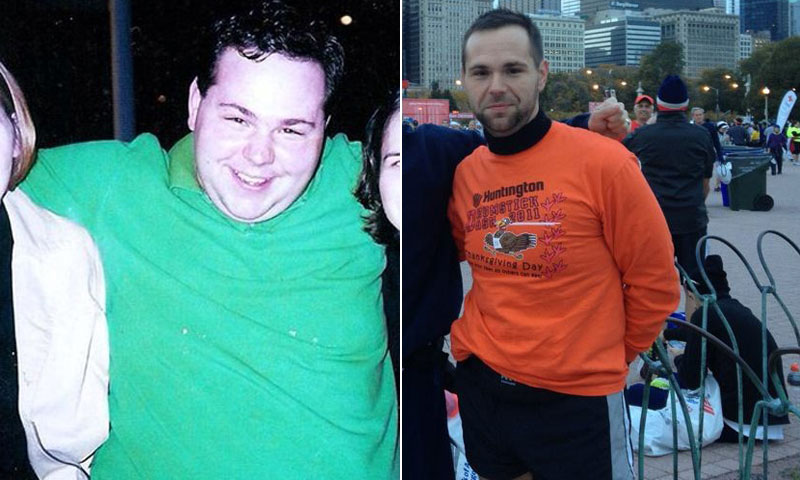 How I Gained It: I was always a heavier kid. There was a clear difference in my weight between my third and fourth grade class photos. As a child, I was much more content with staying inside and playing than going outside to play with friends. The most physical activity I ever did as a child was to ride my bicycle around the neighborhood. While the food options my parents provided were not healthy by today’s standards, they were also not horrible. Yes, there was junk food around, but I was provided with fruits and vegetables as well. I honestly think it was more about how the items were prepared and how there was little limitation on my portion sizes. I do not feel that my parents are personally to blame as much as the environment in which we all grew up is. It is a vicious cycle that we need to focus on in this country.

Breaking Point: I remember it so vividly. I was on a trip home to visit my family, and I had to rush my father to the emergency room, as he was having some issues with his leg. He had already lost one leg due to complications with diabetes, and now his second leg was losing blood flow. In complete honesty, the sight of his leg on that evening literally made me sick to my stomach. I sat there thinking, “I don’t know how these medical professionals can look at this and not be phased.” It was on that night after the doctor informed my father that there was nothing else they could do for him and it was now necessary for them to remove his second leg. my life changed. It was at that exact moment that I realized that if I continued down my current path of eating habits and no exercise, I faced being in the exact same position as my father in 10 to 15 years, if not sooner.

How I Lost It: Having previously “dieted” numerous other times, I took some time to consider reasons I had failed in the past. I believe I failed so many times in the past because I attempted to “bite off more than I could chew.” I opted to focus on my eating habits first. I made the commitment in June 2010 to begin documenting every little bite I ate. I am a very visual person, and the fact that any “bad choices” I made would be forever documented was a huge factor for me. After controlling my eating habits for a few months, I joined a gym, something I had never done in my previous attempts to lose weight. I made the sole focus of my visits to learn to run. I would hop on that treadmill and run for one minute, followed by two minutes of walking, and repeat that for 30 minutes. During each of those workouts I felt I was on the edge of death. I gradually worked my way to running for greater amounts of times — two minutes, one whole song — until I could run a whole mile without stopping. I committed to attending the gym every Sunday, Monday, Wednesday and Thursday. I would make sure that I packed my bag prior to leaving for work. I knew if I allowed myself to go home after work I would never get back out. In November of that same year, I signed up for a local Thanksgiving day race, which was 4.5 miles, but had a “shortcut” route of 2.3 miles. I did the shortcut, but still had to walk some of it. I didn’t let that stop me though. I continued pushing myself. I completed my first 5K in May 2011 and ran the entire course without stopping.

Since that 5K, I have now completed six half-marathons, and in October 2012, I completed a full marathon. I run an average of 100 miles a month, and the foods I used to despise are now part of my regular intake. I have been able to keep my weight off, and I consider myself “addicted” to running. Actually, I seek out all types of exercise now, including biking, yoga and high intensity interval training. I feel unsatisfied if I do not complete some sort of exercise every day. I have even taken my love of running and turned it into a volunteer activity. I volunteer with an organization called Back On My Feet. It is a non-profit organization that promotes the self-sufficiency of homeless people by engaging them in running as a means to build confidence, strength and self-esteem. As member of the core team, I run with members of the program every Monday, Wednesday and Friday at 5:45 a.m., regardless of the weather conditions (well, for the most part!).

I know I am a different person now, because there is a sense of confidence I have in myself that I never had before. I am no longer ashamed of myself. I know I am a healthy and fit person who can accomplish anything I put my mind to.