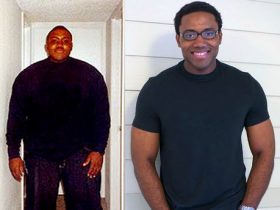 Male Before And After Weight Loss: Kalvin Drops 135 Pounds And Finds Happiness

How I Gained It: I was always heavy. My mother was a great cook, and I took full advantage of that. As a child I was the heaviest kid in class and was teased relentlessly. I learned how to use food as a coping mechanism after my parents divorced. It became my comfort when I was ignored and teased in grade school. By the time I went to high school, I was well on my way to 300 pounds.

My addiction to food continued into my 20s and 30s. I went through two divorces and was left with low self-esteem. I hated who I saw in the mirror. I was suicidal and felt ugly, hopeless and unwanted by anybody. The cycle of self-soothing with food continued. I ate whenever I was not occupied by something else, even in the middle of the night. I would wake up and go to McDonald’s in my nightgown and hide in the car to eat. Eating the food would feel euphoric at first, then deep depression would set in afterwards.

Breaking Point: My journey started in my doctor’s office. He basically told me I was in a life-or-death situation: “If you don’t do something about your weight, you are going to die very soon.” At 34 years old and a mother of three daughters, I was a borderline diabetic, on various blood pressure meds to control my extreme hypertension and very depressed. I was indeed headed toward an early grave. I will forever be grateful for his stern words that jumpstarted my life.

How I Lost It:
The words from my doctor served as my lightbulb moment. Shortly after, I joined a gym, and began to walk into a new season of my life. I did a complete overhaul of my diet, exchanging fried food for veggies and soda for water.

I had not been used to moving my body at all really. I was winded when I would walk up a flight of stairs, or walk to my parked car. I started going to a women’s gym called Curves. The trainer there really helped me out of my embarrassment of working out in front of people. For the first month or so I could only work out for about 15 minutes at a time, then slowly as my endurance increased I found I could do about 25 minutes. It was painful, but little did I know then, through that physical pain, progress within my body was taking place!

I began educating myself about the foods that had made me so overweight over the years. The more I learned, the more determined I was to change my body — and my mind began to change, too. Instead of feeling powerless, I began to feel empowered! I realized then I had to capacity to change my life.

That knowledge lead me out of my own self-imprisonment. I thank God for that gift. Over the course of a year, I not only dropped the weight, but dropped my bad eating patterns. I cut all fried foods and refined carbs from my diet, replacing them with fresh veggies, baked or broiled fish, chicken and lean beef. I adopted a high-fiber, whole-grain lifestyle that left me with energy to burn! I became a fan of water, too. I drink a gallon or more daily, which really aided in my weight loss as well.

My current workouts are about an hour, six to seven days a week, in addition to walking and Zumba. To tone, I work out with weights five days a week. My goal is to compete in amateur women’s bodybuilding with the next year or so.

There is a better life for those who believe there is no hope. I want to share what I have learned and help others to apply those principles to their life. It is now my lifelong mission to help others conquer obesity and become free, not only from physical weight, but mental and emotional heaviness associated with it as well. I truly believe that my transformation was not just for my personal fulfillment but to help others with their own journey to weight loss. I want to make a difference. I want to inspire others who think they cannot make their own dreams come true. I want to help others save their own lives, just as someone did for me.