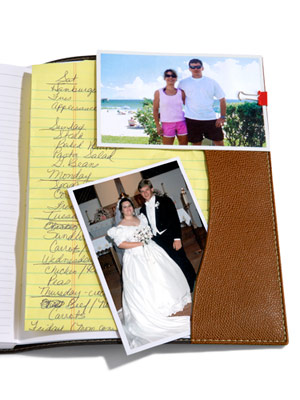 As a teacher, mother, and wife, Kristy Martin was used to taking care of everyone except herself. But when the scale hit 250, she learned a lesson in making herself a priority — and lost 120 pounds as a result.

During high school, I weighed between 170 and 180 pounds, but it didn’t bother me; my dad and brother are over 6 feet tall and nearly 240 pounds each, so I figured my size was genetic. When I got to college, the pounds piled on. I went from being constantly active — I had milked cows and done other work on my parents’ dairy farm — to almost completely sedentary. I mostly ate cafeteria food, ramen noodles, and late-night pizza. I noticed I was gaining weight, but I didn’t really care how I looked. Unlike the other girls who were going to bars to meet guys, I went to college with my high school sweetheart and we got engaged my junior year. I figured it’d be nice to lose a few pounds before the wedding, but I was more concerned with school and wedding plans than I was with my weight. When Doug and I got married senior year, I wore a size 20 wedding dress and weighed 230 pounds.

“When I heard I was obese, I was shocked.”

I got pregnant with my first son, Derek, a month after graduation. Thirteen months after he was born, I got pregnant with my second son, Dustin. At that point, I got hold of my medical records and found a note that read, “Patient is obese, and measures have been taken to address that issue.” I was shocked that my doctor had actually used the word obese. In the past, physicians had suggested that I lose weight, but they never got on my case about it — maybe because I had no other health problems. Yet even knowing I was considered obese didn’t change my attitude. I still snacked on cookies in the teachers’ lounge and ate whatever I fed the boys, like hot dogs and macaroni and cheese. I’d stuff myself with fried chicken, mashed potatoes, and pie when we went to dinner at my parents’ house. After Dustin was born, I weighed 250 pounds and wore size 26 pants.

“I was so bored, even exercise seemed fun.”

In 1999, when I was 28, I had all four wisdom teeth extracted. While I recovered, I was desperate for entertainment. I usually ate when I was bored, but since I couldn’t eat solid food, I had to find something else to do. I began to walk down the road near my home. I only made it about a half mile before I got tired, but it still felt great. So I kept doing it. The more I walked, the easier it got. I really liked getting away for 30 minutes, and my husband enjoyed his time with the boys. After two months, I noticed that my clothes were getting bigger, and I wondered what would happen if I made dietary changes, too. So instead of making fried food, I started grilling and baking and incorporating a vegetable into every meal. I packed lunches instead of eating cafeteria food and snacked on fruits and vegetables. I didn’t tell anyone, because if I failed, I didn’t want them to think, Poor Kristy tried, but she still can’t lose weight. I didn’t have a goal weight; I just figured I’d see what happened. Over the next two years, I built up my walking routine to 45 minutes a day. If it was raining or cold, I walked the hallways of the high school at night. People started noticing my weight loss. They’d come up to me and say, “You look really good! What have you been doing?” I thrived on their compliments. I was doing this for myself, not for anyone else, but it was nice that people could tell. By the time I found out I was pregnant with my third son, Dawson, in 2001, I’d lost 60 pounds — down to 190 pounds. I didn’t want to gain all the weight back, so I stayed conscious about what I ate. As a result, I weighed 180 when I got pregnant with Dylan, who was born in 2003.

RELATED:   I Lost Weight: After Being Denied Health Insurance Because Of Her Weight, Melissa Hairston Lost 140 Pounds

“I didn’t want to be the fat sister.”

Four months after Dylan was born, my sister Carrie announced that she was getting married in a year. At that point, I was around 180 pounds. My two sisters have always been a size 6 or 8, and for once I didn’t want to be the fat one in the pictures. Every day, I brought sandwich bags full of fruits and vegetables, 100-calorie packs, and yogurts to school. I didn’t have a complete meal until dinner, but snacking every two hours kept me full. I ate one cookie, not three, in the teachers’ lounge, and at family dinners I piled my plate with mostly vegetables and salad instead of fried chicken. I was now walking four miles five or six times a week. I also started weighing myself weekly to track my progress. The best part about losing weight was all the clothes I could buy. I hadn’t been out of the plus-size department in years! Sometimes I’d walk by a mirror and think, Is that really me? Trying on my bridesmaid dress was also a huge motivator — I kept having to get it taken in! By the wedding, I was 150 pounds and a size 10. Family and friends kept telling me how great I looked. At first, the compliments made me feel shy, but I was proud that I’d met my goal.

After the wedding, I realized I was ready for something beyond walking. The first time I ran, I could only go a half mile without feeling like I was going to die. But I loved the challenge. I ran farther every day, and after two months, I could run four miles. It felt good knowing that at age 34, I was able to do something I once thought impossible. Once I started running, the weight just melted off. I lost 20 pounds in two months and hit my current weight of 130 pounds. Now I run six miles five to six days a week and have maintained my weight for nearly four years.

“People don’t recognize the new me.”

I have so much energy now. My husband has always told me he loves me no matter what, but now he compliments me a lot more. I’ve also become a better example for my children. My oldest two barely remember what I used to look like! They’ll look at pictures and say, “Was that you?” People who haven’t seen me in a while don’t recognize me either. Some have told me I’m a role model. Sometimes when I think about what I’ve done, it doesn’t seem like a big deal because it was such a gradual process. I’ll always have to be conscious of what I eat and how much I exercise. But when I look at photos, I realize the magnitude of it all. I could have stayed at 250 pounds and even gotten bigger! It was a huge accomplishment, and I’m so proud of that.

RELATED:   I Lost 125 Pounds: Metisia Shed The Weigh And Got Her Life Back

1 GET OVER THE GUILT. At first, I felt selfish leaving the kids to go for a walk. But then I realized being active was making me a better mother. After teaching all day, walking was a good stress reliever.

2. STOP PICKING. I used to graze while I was making dinner, then eat my kids’ leftovers. I probably ate a meal’s worth of calories that way! Now I drink diet soda when I cook so I don’t nibble.

3. GET A NEW WARDROBE. My biggest incentive to keep losing was going into stores and trying on clothes to see what would fit. The first time I tried on size 6 pants — and they fit — I called my mother because I was so ecstatic! My husband keeps telling me I can stop buying new clothes now.

4. SAY NO TO FOOD-PUSHING RELATIVES. One summer, my grandmother would bring me fried chicken, mashed potatoes, and pie every day for lunch. I finally told her, “I love your cooking, but I’m trying to fit into a bridesmaid dress.” It was hard to say no, but once I explained it, she got it.

5. PLAN MEALS IN ADVANCE. One of our sons had to plan a weekly menu for a project, and it was surprisingly easy. Now we always plan weekly menus, which helps us eat healthier. If the boys have activities, I’ll make sandwiches, which are better than hot dogs or fast food.

ARE YOUR FEELINGS MAKING YOU FAT?

Kristy used to scour her kitchen for a snack whenever she felt bored — and she isn’t alone. “Boredom, anger, depression, and self-criticism commonly cause people to reach for food,” says Roger Gould, M.D., author of Shrink Yourself. “Food is self-medicating; people use it to shut their minds off from what they’re feeling. But that also shuts off their awareness of how many calories they’re consuming.” Here’s how to stop emotional eating before it starts.

1. IDENTIFY THE EMOTION. Ask yourself if you’re really hungry before you take a bite. If the answer is no, think about why you want to eat. “Pause and sort through your feelings,” Gould says.

2. DISTRACT YOURSELF. “Find a way to deal with those emotions other than with food,” says Gould. If you’re angry, call a friend to vent. Bored? Go for a walk or check your email. If you’re stressed, try deep breathing, or if you’re low, watch a funny YouTube clip. Soon, the feeling of hunger will pass.

3. ASK WHY. Think, Why do I try to cope with this by eating? Doing so will help you recognize this behavior in the future, so you think twice before automatically turning to food.

4. DON’T BEAT YOURSELF UP. Instead, reward yourself when you get it right. Try putting a dollar in a jar each time you prevent yourself from emotional eating, then use the money to buy yourself something nice (other than food!).

Want to show off your weight loss? Send us your story at redbook@hearst.com. Be sure to type “RLHL Story” in the subject line and include two full-body photos (one before and one after).