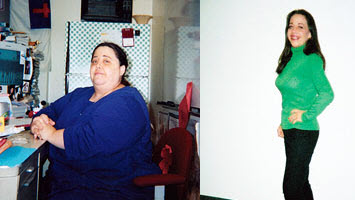 At 342 pounds, Jamie Ritchey was practically immobile. Here’s how she lost weight, took control, and got back on her feet.
Name: Jamie Ritchey
Age: 45
Height: 5′
Weight Before: 342 pounds
Weight After: 115 pounds
Pounds Lost: 227
Time at Current Weight: 2 years

Talk about a surreal moment: While speaking at a staff meeting, Jamie Ritchey, 115 pounds, held up a pair of her size 5X jeans. “Everyone gasped,” says the teacher from Tulsa, Oklahoma. As she explained, “I can now fit my whole body into one leg of my old jeans.”

Three years ago, Jamie weighed 280 pounds when a car wreck left her bedridden. “I had a torn knee, massive bone bruising, and a broken hand,” she says. Her students brought her burgers, pizza, and Chinese food, and within six months Jamie had packed on 62 pounds. “I was so huge I had to sleep in a recliner,” she says. “I couldn’t breathe when lying down — it was terrifying.” She desperately wanted to lose weight, but was battling a lifetime of compulsive eating. “Food was my comfort — tacos, fried chicken, mashed potatoes.” Crash diets had previously failed, but Jamie knew something had to be done. When she couldn’t fit into a regular MRI tube during a bone scan, Jamie had a clear choice: “I could live or die,” she says.

A friend who was losing weight suggested eating a little bit every few hours. It worked. Jamie started eating fruits and veggies, cut her portions in half, and replaced her daily two liters of sugary soda with water. To ditch her fast-food habit, she began cooking on the weekends. And instead of turning to meals for comfort, she booked manicures and facials. Jamie dropped 80 pounds in six months. Then she started walking — less than a quarter mile to start, then up to three miles a few times a week. Within two years she had lost a staggering 227 pounds. “I feel powerful, energetic, and feisty,” she says. “I’m even dating — how cool is that?”

My Diet: “A two-egg omelet and oatmeal for breakfast, chicken for lunch, lean turkey sausage and a baked potato for dinner, and a lot of fruits and veggies for snacks.”

My Guilty Pleasure: “Ice cream with Oreos. Life should be enjoyed, and I know I can treat myself without going back to 342 pounds.”

My Workout: “I walk two or three miles on the treadmill every other day, and weight train on alternate days.”

My #1 Motivator: “The looks of utter amazement from people who haven’t seen me lately — priceless!”