Home » Weight Loss Before and After: Tracy Lost 40 Pounds By Carving Time Out For Herself 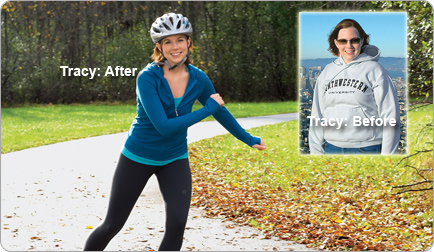 Until her college graduation, Tracy maintained a normal weight. “I ate well, and my campus was so spread out, I got exercise simply by walking to class,” she says. But that all changed when she started working a desk job. “I didn’t move much during the day, and I socialized with my co-workers after work in bars and restaurants,” she says. Before Tracy realized what was happening, she’d put on 25 pounds.

“I didn’t own a scale,” she says. “And since I was buying a lot of new clothes for work anyway, I wasn’t really aware that I was wearing larger sizes.” But while shopping one day three years ago, Tracy tried on the biggest pants size available—and they were too tight. “As long as I could buy things at my favorite stores, I didn’t know I had a problem,” she says. “That day, I realized something had to change.”

Diet Tip: Cut Out the Sweets

Tracy first cut out soda. “My office had free soft drinks, and I sipped them all day,” she says. “That move slashed hundreds of calories.” She also switched her lunch- time routine. “I brought salads from home to control what I was eating,” says Tracy, who began losing a pound a week. Tracy also had a rarely used gym membership and came up with a plan. “My weekdays were hectic, so I started going every Saturday and Sunday,” she says. “I also found a few early-morning weekday classes that wouldn’t interfere with my job.” Tracy not only shed 40 pounds in 10 months, she gained the tools to keep them off.

Diet Tip: It’s All About Attitude

Having a realistic attitude prevented Tracy from getting frustrated. “Life happens, and things can disrupt your routine,” she says. “But if I make mostly good choices, I can stay at a weight at which I feel fabulous.”

1. Don’t go to extremes “Someone once told me that you should never do anything today that you can’t do for the rest of your life. So I didn’t starve myself or workout three hours at a clip because I knew I couldn’t sustain that for very long.”

2. Have a go-to meal “I eat very similarly from day to day because it makes it easier to keep track of calories. I change up the dishes a little, but I stick to the same general idea.”

3. Divide and conquer “I love frozen pizza, but I shouldn’t eat the whole thing. So I cut it in fourths while it’s frozen and only heat up one piece. With a salad and fruit, that’s dinner!”