How I Lost 69 Pounds: Mark Drops The Weight For Her And Him 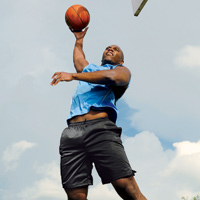 After I graduated from college in 2002, I immediately wanted to set up a mature new life: I proposed to my girlfriend (successfully), scored a good job at a computer store, and bought a house. Perfect. But a few months later I lost my job. I worried that I wouldn’t be able to afford the house, so I panicked and took three part-time gigs—and was so stressed (and strapped for time) that I ate the fastest, junkiest stuff I could find. It was McDonald’s for breakfast, Chinese food for lunch, and Olive Garden for dinner. My diet was as chaotic as my life, and I ballooned past 250 pounds.

You can’t call off a wedding because you’re overweight, so my girlfriend and I tied the knot on schedule. Then we took a honeymoon cruise toKey WestandCozumel. It should have been one of the happiest times in my life, but instead I felt uncomfortable and sluggish. When we came home and uploaded the photos, I was shocked to see my beautiful wife standing next to an unrecognizable version of me. I had no idea how big I’d really grown. I knew I had to change—for her and for me.

My biggest challenge was saying goodbye to desserts. I really loved them. But I found I could satisfy my cravings with less-fattening fare. A fresh fruit smoothie, for example, is a great swap for strawberry cheesecake, and as long as I indulged a little, I wasn’t tempted to binge on the really bad stuff. To make sure I didn’t fall back into my old fast-food patterns, I planned my day’s meals ahead of time and included a lot of lean protein, like salmon and chicken. I also stocked up on healthy snacks—apples, raisins, and almonds—because they helped tide me over between meals.

When I first started working out, I would walk on the treadmill. It was easy and manageable, and I was afraid of pushing myself. But if you work out consistently, even in small ways, your energy level climbs and you can take on bigger challenges. Now I run for about half an hour, and sweat on the stair climber as well. To stave off boredom, I take my workout outside sometimes and run intervals. I also love to bicycle. I can make it through an hourlong spinning class now, and I’m still amazed every time I do it.

RELATED:   Weight Loss Before and After: Kim Focused On Healthy Choices And Lost 100 Pounds

By 9 months into my diet, I looked completely different and had found a new job. I hadn’t realized how low my self-confidence was before I shed the pounds; after the change, I felt eager to take on new challenges. Losing weight will do that: It teaches you to be persistent and stay motivated, and that’s knowledge that applies to every part of your life. I signed up for classes at a local college and became certified in Apple computers. That new skill—plus my newfound belief in myself—earned me a promotion at work. Now I can afford the house, and I look great next to my wife.

Related ItemsOver 60 Pounds LostrunningSEO
← Previous Story Male Before And After Weight Loss: Kris Sheds 107 Pounds And Starts Doing Triathlons
Next Story → Men Weight Loss Success Story: Rick Loses 71 Pounds And Does The Things He Could Never Do Before