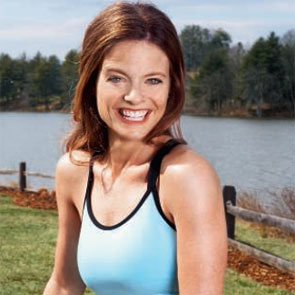 Candace’s challenge Candace knew she would gain weight during each of her three pregnancies—and she did, eventually reaching 175 pounds. What she didn’t count on was that after the birth of her third child—and a series of diets—the scale would get stuck at 160.

Embracing exercise “Although I watched what I ate after my last pregnancy, I hadn’t started exercising,” says Candace. “I’d never done it before, so I didn’t know where to begin.” But one day, when her youngest was 3 and she pulled on her “fat” jeans yet again, she decided she’d had enough. She realized that if the diets she’d been relying on hadn’t worked by then, they never would. So she ditched them and hired a personal trainer, who had her strength-train a few days a week. “I was getting toned but not losing weight,” she says. That’s when she knew she’d have to change her lifestyle and incorporate cardio, like the people she saw at the gym, to get real results.

Staying focused To start, she decided to jog the threemile loop around the lake near her house. “I could only run for a few minutes the first time,” she says. “But I didn’t want to give up, so I walked the rest of the way.” A month later, she finally ran the whole loop—and had lost 3 pounds. After that, Candace was motivated to improve her eating habits. She taught herself to cook her usual fare in new ways so her meals would be healthy as well as kid-friendly. She grilled and baked everything she used to fry, added heaping servings of greens to lunches and dinners, and completely cut out fast food. She began losing about 5 pounds a month. “My clothes were getting baggier, but I wasn’t quite confident enough to ditch them,” she says. “When I finally did six months later, I got so many compliments. That gave me the encouragement to keep going.”

Teaming up Candace branched out to group activities, like cycling and strength-training classes at the gym, which helped her progress. “It was inspiring to feel like I was a part of something bigger,” she says. Soon she ran a 5K race with a friend and joined a local women’s cycling team. Her efforts paid off: In another year, she reached 115 pounds. Now she’s getting her family on a health kick, chasing her kids on foot around the three-mile path as they ride their bikes. “I never thought I would look at working out as fun,” says Candace. “But now that I do, staying in shape is easy.”

Make a calorie trade “I don’t want to limit myself, so if I eat an ice cream cone with my kids, I don’t feel guilty about it; I just run a bit longer the next day.” Think ahead “Having a tangible goal—like losing 45 pounds—lets me track my progress. Before, when I just wanted to ‘lose weight,’ it was too easy to give up.” Be efficient “When I go to the gym, I like to keep it short and sweet. Strength-training circuits give me a full-body workout in half the time.”