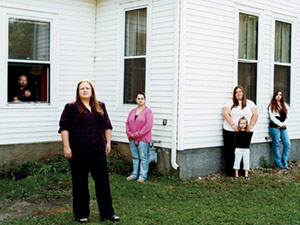 For Judy Murphy, much of the past is a fog. But some vivid, painful memories pierce through. The day her son’s kindergarten teacher told her he often hid under his desk, too miserable and frightened to play. The day she bought a tent, pitched it in a park in her town, and moved in with her two young daughters because she was sick of crashing with friends or getting kicked out of apartments. And worst of all, the day a judge sentenced her to two months in jail, and Judy lost custody of her children.

“I couldn’t run from the pain anymore,” she says. “All I could think was, What have I done to my kids?”

For a decade, Judy was addicted to methamphetamine, the powerful, ruinous stimulant also called meth, or crank. She first snorted it when she was 23, an unmarried high school dropout on welfare with a 3-year-old son, Dustin. With the drug, she felt happy, attractive, and capable of achieving anything. Soon she was injecting the drug daily. She knows it sounds crazy now, but back then Judy believed to her core that using meth was the first thing she’d ever done right. “I had this sense of ease,” she says. “I had energy. I wasn’t hungry, and I’d always had a problem with my weight. I had friends, good people who gave me meth because they loved me. It seemed to be the solution to all my problems.”

She eventually started selling the drug, which fueled her habit and delusions. She had grown up poor; it felt glorious to be able to lavish toys and clothes on Dustin. “I had money,” she says. “I thought, Hey, I’m a good mom!”

But others weren’t fooled. Dustin’s kindergarten teacher was the first to recognize the ravages of addiction in the jittery mom and her cowering boy and gently called Judy on it: “Is there something I can do to help you out?”

Judy remembers the moment: “I was so ashamed of myself and so sad for my son. I had the same hopes and dreams for him that every mom has. I loved him with all my heart. So I decided I was going to quit.”

She tried—so many times over the next eight years she lost track. Her family had her committed to treatment centers, but she bounced from one program to the next, eventually giving up or getting tossed. She also repeatedly attempted to stop on her own. “The withdrawal was horrific,” she says. “I’d sleep 24 to 48 hours at a time. I’d wake up, and my hands and feet would be numb and my brain was completely fuzzy. The worst would pass in a few days. I’d feel good, and I’d think, I’ve got it down pat. But then I’d look at my life and feel bad. That’s the real pain when you’re an addict: Using hurts, but reality hurts worse.”

When Dustin was 9, Judy got pregnant. She shot up all nine months, terrified she would harm the baby but unable to stop. “I would cry when I was sticking the needle in my arm. I just hated myself for it. I asked God to help me die,” Judy says. She gave birth to a healthy girl. Within a year, she was pregnant again, and the same thing happened.

Judy’s life continued to spin out of control. She began shoplifting, occasionally food for the kids but more often cigarettes or cordless phones she sold for cash to buy meth. Dustin, 12 by now, grew so disgusted with her that he moved in with Judy’s brother. More than once, Judy asked relatives to take care of her girls too. But she missed them terribly and each time took them back within a few days. They moved constantly — to friends’ homes, crummy apartments, and for a while, the tent in the park.

Judy got arrested three times for theft. The third time, she was sentenced to four weekends in jail. She slept through the first weekend, nearly comatose from withdrawal. The next weekend, she smuggled in drugs and needles and got high in her cell. The third weekend, she failed to show up. A warrant went out for her arrest.

As a result, a week before Christmas in 1994, a judge sentenced Judy to 60 days in jail, a treatment program, and community service cleaning a landfill. Judy could handle that, but not what came next: Her daughters, 4 1/2 and 3, were removed from her custody. “I was devastated,” she says. “I didn’t think there was any hope.”

Judy knew she had to straighten out or she’d never get her kids back. For the first time, she buckled down and finally took treatment seriously. The treatment center required her to join a 12-step program. She attended meetings religiously, sobbed her heart out, and let women who were already well down the road of recovery cheer her on. She relapsed three times over the next nine months, but no longer got pleasure from a binge. “I was terrified I wouldn’t make it,” says Judy. But her friends in recovery insisted she would make it, and their faith inspired her to stick with it: She’s been clean and sober since September 22, 1995.

In her first year of recovery, Judy had a series of jobs — factory work, waitressing, telemarketing — but dreamed of something more. “I wanted to do something that gave my life meaning,” she says. “The women in recovery I was hanging around with — the women I admired — had jobs helping people. I wanted to do that too, so they said, ‘Go to school.'”

Judy had gotten her GED during one of her earlier attempts to get clean. Now she enrolled in college, living on student loans. She started working in a women’s crisis center and joined a county task force on drug-abusing women and their children. One day, someone suggested that she organize a support group for meth-addicted mothers. Judy had gotten her daughters back by then (and would later mend her relationship with her son too), and she loved the idea of helping women deal with custody, the courts, and their own demons. “I felt blessed to make it out of the hell I lived in so long,” she says. “I knew lots of people could feel as good as I now did.”

Judy tacked up posters advertising the support group around town. Four women came to the first meeting, on July 9, 1999. As that group grew and the original members thrived, word spread about Moms Off Meth. New groups sprouted around Iowa, then Nebraska, Minnesota, and Washington, helping countless other women turn their lives around.

After graduating from college, Judy went to work as a social worker at the Iowa Department of Human Services, in the very office that had removed her kids from her care — and in doing so, saved her life. Now she’s a meth specialist for the department, doing outreach and counseling in 14 counties. She sees meth addicts everywhere, and it stirs a complicated mix of emotions. “I feel sadness and frustration,” Judy says. “But I feel a lot of hope, a whole lot of hope, because I know recovery is possible.”

Judy will never say she’s happy she endured what she did, and to this day she cries when she talks about the anguish she put her kids through. But she savors each day and knows her struggles helped bring her to this point. “I think my past was a gift from God,” Judy says. “And the work I do is a gift back to God. My children and I, we have a great life. I don’t know if I would have been so grateful for my life if I hadn’t had all that pain and suffering.”