“I Dropped 80 Pounds by Eating at Home” 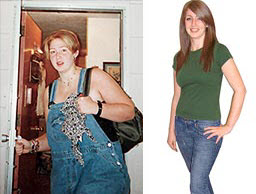 At 230 pounds, Dawn Mikulastik was once too tired to do anything. Now 80 pounds lighter, she’s reclaimed her energy and is pursuing her dreams.

As a college student living in Boston, Dawn Mikulastik didn’t see a lot of the historic city. “At 230 pounds, I was too fat and tired to do anything,” says the New York City waitress and aspiring actress. “I’d walk a few blocks and be completely exhausted — it was hell.” Since she dropped 80 pounds, that’s all changed. “Now I love getting off the train a few stops early and walking 30 or 40 blocks. The quick workout lifts my spirits.”

Battle of the Buffet
Dawn grew up on cookies, Cheetos, and McDonald’s. “I’d snack all day long,” she says. By the time she reached her teens, her unhealthy diet and lack of exercise had pushed her weight to 200 pounds. In college, Dawn ate most meals at the all-you-can-eat cafeteria buffet, which helped her pack on an additional 30 pounds. But reality hit as graduation loomed. “I wanted to be an actress, but I didn’t want to go on auditions at my size,” she says.

Fit for Any Role
Dawn began biking to her internship, four miles away, and hitting the campus gym three times a week. “I started with 30 easy minutes on the bike and treadmill,” she says. At the same time, she cut her portion sizes in half and prepared healthy meals in her room so she could avoid the cafeteria. Within a few months, Dawn had lost 20 pounds. After graduation, she kept up her healthy habits and continued losing steadily. By the two-year mark, she had shed a total of 80 pounds.

Now Dawn juggles work, a busy social life, and auditions. “Getting healthy has given me the confidence to pursue my acting dream,” she says.

Dawn’s Weight-Loss Plan
The Diet: Breakfast is cottage cheese and pineapple or kiwi. At lunch, Dawn has grilled chicken salad with low-fat dressing. Dinner is grilled fish or steak, spinach, and mushrooms. She snacks on carrots and applesauce.

Biggest Temptation: Fried calamari and other munchies at work. “I bring in my own food — veggies and cottage cheese — so I’m not as tempted.”
What She Couldn’t Wait to Wear: Halter tops. “Before, my chest was too big and I had major back rolls, but now I look good even without a bra.”