Weight Loss Before and After: Amy Conquered Her Fear and Fat And Lost 27 Pounds 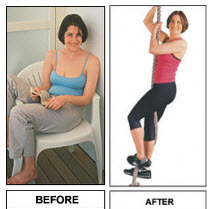 The moment I knew I was a success: “When, 4 months after I started, I climbed up a 13-foot rope and touched the ceiling for the first time”

I didn’t grow up with a weight problem. Nevertheless I’ve felt bad about my body, and myself, for almost as long as I can remember. As a teenager, I was noticeably awkward in my image-conscious family. Everybody else seemed happy, successful, and slim. Not me. I never saw myself as attractive, and because of my low self-esteem, I became the consummate outsider.

My weight began to creep up the year before I started law school. The stress of studying, on top of my need for belonging, led me to an endless array of comfort foods: cookies, ice cream, chips, mac and cheese–whatever I wanted. By the end of my first year, I’d gained 25 pounds.

The next year I became so busy with school and felt so out of control, I stopped eating real meals altogether. Basically, I starved myself down to 100 pounds by having egg whites and toast for breakfast, skipping lunch, and eating a low-fat frozen dessert or a small amount of food for dinner. Maintaining such a low weight not only was unhealthy, but also impossible. Upon starting a job after graduation, my weight yo-yoed, and I eventually regained it all, plus 5 pounds. Despite having a boyfriend who loved me, I felt ugly and gross and unworthy of his affection.

In March 2003, in an effort to increase my fitness level and lose some weight, I decided to join a local runners’ group. On the first run, I suffered an exercise-induced asthma attack that left me out of breath for days. That’s when I saw the writing on the wall: I was only 35 and didn’t even have the endurance to run a mile. I was tired of feeling lousy and out of shape.

After doing some diet and fitness research on the Internet, I became intrigued by a program called Pure Power Boot Camp (PPBC).

I decided that enlisting in the military-inspired program was just what I needed. The first couple of sessions were nerve-racking–I was scared of heights, which made ascending the ropes especially daunting. Thanks to the staff’s encouraging “Don’t let anything own you” attitude, I fought through my fears and kept trying the rope until, finally, 4 months after I started, I made it to the top.

Four times a week, I went to PPBC to practice crawling under rubber “barbed wire,” climbing over walls, racing through tires, and jumping over hurdles. There were several days when I felt frustrated to the point of tears, but the chorus of cheers from my classmates kept me going.

After class, I’d sometimes find debris from the shredded-tire flooring in my clothes–a token of all that I’d accomplished that day. It seemed the innate insecurities that had ruled my life thus far were being displaced with each hurdle I overcame.

Still, I knew if I were going to turn my life around, I’d also have to stop using food for comfort, especially at night. Lauren Brenner, my drill instructor and the founder of the camp, suggested that I could curb this pattern simply by eating more healthy food during the day. In her view, I was ignoring my hunger all morning and then turning to sweets to satisfy my basic need for fuel.

I took her advice and customized my own plan: A meal-replacement shake for breakfast, some lean protein such as turkey chili or a Boca burger for lunch, and a bit of fruit or a Kashi bar for a snack. For dinner, I had a balance of protein and carbohydrates. That meant eating either a skinless chicken breast, a baked falafel, or some grilled fish with vegetables on the side, which I followed with a piece of chocolate or semifrozen fat-free milk with Hershey’s syrup to help stave off late-night eating.

The camaraderie at boot camp supplied the kind of support I’d always lacked. One thing’s for sure: I never would’ve been able to drag myself up a dozen flights or endure countless sit-ups and squats without the constant encouragement. By September 2004, I had lost 17 pounds, and by the spring of 2005,

I’d dropped 10 more. My asthma virtually disappeared, thanks to the physical conditioning I’d been through, and I found that I could eat more–albeit healthier–than ever. I grew physically and psychologically stronger.

Now I’m doing new activities that would have seemed completely out of reach before. I’ve joined the Appalachian Mountain Club, hikedWest Virginia’s Via Ferrata (Path of Iron), and taken a rock-climbing course. I even booked a 14-day wilderness survival trip toUtah. During a typical weekend at home, I’m up and at it, enjoying a 2-hour yoga class; 3 years ago, I would have been tucked in bed.

The truth is, boot camp didn’t just rebuild my body–it fortified my mind. Watching muscle definition appear as my body became leaner and stronger made it easier to keep my eating under control, although I still indulge with junk food occasionally. It seemed the more I worked out, the more I liked myself–which is really all the motivation I needed to take care of me.