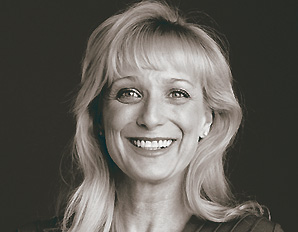 Determined not to end up like her dad, Maureen Harris overhauled her eating habits–and her life.

In 1990, I went on a bike ride with my husband and found myself doubled over with deep abdominal pain that wouldn’t go away. It was such a mystery: I was in great shape. After a frustrating year, a specialist finally diagnosed severe endometriosis: Blood-filled cysts and excess uterine tissue covered my reproductive organs. Four surgeries later, the growths were gone, but the scar tissue left me infertile. The pain of knowing I could never bear children combined with the physical discomfort was overwhelming. Although I had amazing support from my husband, it was hard to motivate myself to get ready in the morning, and I rarely left the house. I eventually had to quit my job as an esthetician. Within 3 years, I gained close to 75 pounds. The doctor said flat out that my blood pressure and cholesterol were off the charts and I’d die young if I didn’t make changes.

I felt powerless: My dad died of heart disease at age 52, and my brother had a triple bypass at 48–I was simply falling in line with my family history. Then in early 2006, 16 years after I should’ve taken action, I saw a picture of myself and something finally clicked. I looked so large and unhappy–like someone I didn’t even recognize. For the first time I clearly saw what I’d done to myself and realized I could choose not to let the fate of my relatives become my own. Three days later, I signed up for NutriSystem, a low-glycemic plan based on foods that don’t spike blood sugar.

I lost 25 pounds in 2 months eating the program’s prepackaged foods. I feared what would happen when I had to make my own meals, so I started printing out lists of low-glycemic foods and recipes from people I met on the plan’s message boards.

That’s how I became friends with fellow dieter Karen Glynn. Karen motivated me to exercise, while I encouraged her to resist cravings. When I bought a treadmill, she’d send me notes like, “Did you do your 30 minutes today?” And I’d e-mail her about good-for-you items I spotted at the store. She even thought of me while she was on vacation; she mailed me a wind-up doll that runs on the treadmill! I credit so much of my happiness now to her support. Even though we’ve known each other less than a year, we’ve formed a friendship that will last a lifetime–and what a long, healthy life it will be!

How I did it

I ate fewer…white carbs. I always loved bread. Give me the breadbasket, and I was a happy girl.

I ate more…whole grains and veggies. At restaurants, I asked to swap fries or chips with vegetables. And I bought whole wheat bread or pasta at the store.

I exercised…on my treadmill for 30 to 45 minutes, 4 or 5 days a week. I recorded my favorite TV shows and saved them to watch during my workout.

My mantra was…”I can choose.” My whole life changed once I realized that I controlled my eating decisions. Instead of having pie at Easter this year, I asked for strawberries with fat-free half-and-half. I felt truly empowered.

Unexpected gain: A new career path. This fall, I hope to return to school to become a registered dietitian. I want to help other people–especially my brother and sisters–live longer, healthier lives.

My health bonus: My cholesterol dropped 66 points–now it’s well within the healthy range!