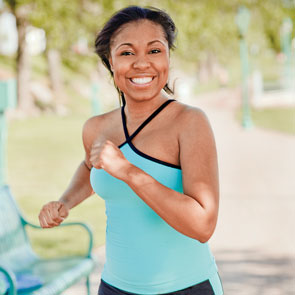 Tamira’s challenge In college, Tamira made time for everything but her health. She excelled in class, served on the student council, and volunteered, but because she was so busy, she ate takeout and skipped exercise. She graduated on the dean’s list—and with 20 extra pounds, at 142.

Shifting her priorities Tamira’s poor eating habits stuck with her after she left school. “I complained about my tummy bulge, but I didn’t do anything about it,” she says. “For some reason, I didn’t understand that my body was like every other aspect of my life: I had to put work into it if I wanted results.” Then Tamira was faced with financing graduate school. “I heard that the Miss Tennessee Pageant gave scholarships, so I researched the requirements,” she says. Her academic and service records made her a good candidate. “But I looked at photos of past competitors and realized I’d have to make some changes,” Tamira says. “That was the inspiration I needed to improve my diet and fitness level.”

Prep work With just a few months to go before the first event, Tamira consulted a pageant trainer and nutritionist. At his advice, she gave up white bread and refined sugars and filled her fridge and cabinets with healthy staples like brown rice, chicken, and fresh vegetables. She also posted her “before” pictures and gym plan around the house to remind her what she wanted to improve and how she planned to do it. Tamira began walking on the treadmill for half an hour each day, adding five-minute bouts of running until she could jog the whole time. To tone up, she began to lift free weights. “Just as I was starting my third week, I noticed I was waking up refreshed and energized, which hadn’t happened in years.” In the first month, she lost 8 pounds.

RELATED:   Weight Loss Before and After: Sandy Finds A New And Improved Self By Losing 70 Pounds

Taking center stage As Tamira lost weight, little things kept changing. “I used to wear neutral colors to blend in, but I started shopping for brighter clothing,” she says. “I felt bolder and happier every day.” After losing 20 pounds in four months, Tamira began competing in the smaller pageants leading up to MissTennessee. Although she didn’t win a title, she did receive several awards that came with grants-including Miss Congeniality- that helped her finish grad school. “The pageant came to me as a blessing in disguise,” she says. “It helped me see that living healthy can give me the energy I need to reach all my goals.” 3 stick-with-it secrets

RELATED:   Weight Loss Before and After: Lesley And Mike Williams Lost 275 Pounds Together

Spice it up “When I got tired of my routine, I tried Pilates and salsa classes. They worked different muscles, and I even met workout buddies in them.” Think of the benefits “On busy days, I don’t skip exercise, I do it during lunch. It helps me de-stress.” Change your perspective “I used to be jealous when I saw perfectly toned people. Now I tell myself that if I keep it up, there’s no reason I can’t look like that too!”