Home » How to Fix Bad Ankles 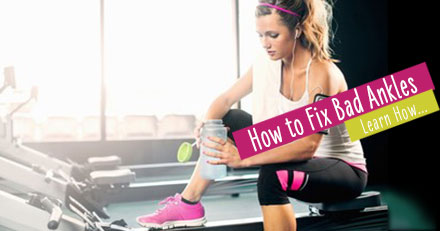 Ankles provide a rare opportunity to recreate a seminal medical study in the comfort of your own home. Back in the mid-1960s, a physician, wondering why, after one ankle sprain, his patients so often suffered another, asked the affected patients to stand on their injured leg (after it was no longer sore). Almost invariably, they wobbled badly, flailing out with their arms and having to put their foot down much sooner than people who’d never sprained an ankle. With this simple experiment, the doctor made a critical, if in retrospect, seemingly self-evident discovery. People with bad ankles have bad balance.

Remarkably, that conclusion, published more than 40 years ago, is only now making its way into the treatment of chronically unstable ankles. “I’m not really sure why it’s taken so long,” says Patrick McKeon, an assistant professor in the Division of Athletic Training at the University of Kentucky. “Maybe because ankles don’t get much respect or research money. They’re the neglected stepchild of body parts.”

At the same time, in sports they’re the most commonly injured body part — each year approximately eight million people sprain an ankle. Millions of those will then go on to sprain that same ankle, or their other ankle, in the future. “The recurrence rate for ankle sprains is at least 30 percent,” McKeon says, “and depending on what numbers you use, it may be high as 80 percent.”

A growing body of research suggests that many of those second (and often third and fourth) sprains could be avoided with an easy course of treatment. Stand on one leg. Try not to wobble. Hold for a minute. Repeat.

This is the essence of balance training, a supremely low-tech but increasingly well-documented approach to dealing with unstable ankles. A number of studies published since last year have shown that the treatment, simple as it is, can be quite beneficial.

In one of the best-controlled studies to date, 31 young adults with a history of multiple ankle sprains completed four weeks of supervised balance training. So did a control group with healthy ankles. The injured started out much shakier than the controls during the exercises. But by the end of the month, those with wobbly ankles had improved dramatically on all measures of balance. They also reported, subjectively, that their ankles felt much less likely to give way at any moment. The control group had improved their balance, too, but only slightly. Similarly, a major review published last year found that six weeks of balance training, begun soon after a first ankle sprain, substantially reduced the risk of a recurrence. The training also lessened, at least somewhat, the chances of suffering a first sprain at all.

Why should balance training prevent ankle sprains? The reasons are both obvious and quite subtle. Until recently, clinicians thought that ankle sprains were primarily a matter of overstretched, traumatized ligaments. Tape or brace the joint, relieve pressure on the sore tissue, and a person should heal fully, they thought. But that approach ignored the role of the central nervous system, which is intimately tied in to every joint. “There are neural receptors in ligaments,” says Jay Hertel, an associate professor of kinesiology at the University of Virginia and an expert on the ankle. When you damage the ligament, “you damage the neuro-receptors as well. Your brain no longer receives reliable signals” from the ankle about how your ankle and foot are positioned in relation to the ground. Your proprioception — your sense of your body’s position in space — is impaired. You’re less stable and more prone to falling over and re-injuring yourself.

For some people, that wobbliness, virtually inevitable for at least a month after an initial ankle sprain, eventually dissipates; for others it’s abiding, perhaps even permanent. Researchers don’t yet know why some people don’t recover. But they do believe that balance training can return the joint and its neuro-receptor function almost to normal.

Best of all, if you don’t mind your spouse sniggering, you can implement state-of-the-art balance training at home. “We have lots of equipment here in our lab” for patients to test, stress, and improve their balance, Hertel says. “But all you really need is some space, a table or wall nearby to steady yourself if needed, and a pillow.” (If you’ve recently sprained your ankle, wait until you comfortably can bear weight on the joint before starting balance training.) Begin by testing the limits of your equilibrium. If you can stand sturdily on one leg for a minute, cross your arms over your chest. If even that’s undemanding, close your eyes. Hop. Or attempt all of these exercises on the pillow, so that the surface beneath you is unstable. “One of the take-home exercises we give people is to stand on one leg while brushing your teeth, and to close your eyes if it’s too easy,” Hertel says. “It may sound ridiculous, but if you do that for two or three minutes a day, you’re working your balance really well.”