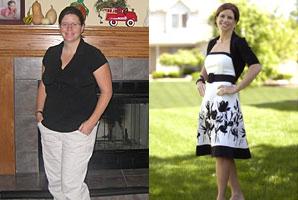 See how Sara Johnson went from size 16 to 6, one small step at a time.

About three years ago, Sara Johnson gave birth to her second child—and faced the fact that she weighed 200 pounds. Sara had put on 20 pounds following a miscarriage in 2005 and retained 35 pounds after delivering her second child. With two little ones, Sara, now 35, realized she had to take better care of herself. “I knew I needed to get in shape so I could be a great mom for my children,” she says.

Setting her goal weight at 140 pounds, Sara began with a simple plan to walk an hour a day, four days a week. Foodwise, Sara simply cut out “anything that comes in a box,” including TV dinners, cookies, and crackers. She filled up on baked chicken, grilled fish, vegetables, and couscous.

Sara found smart-eating advice she could stick with in You: On a Diet ($25). Sara’s favorite trick? She trades salad dressing for a pinch of garlic salt.

Sara’s training for the Walt Disney World marathon in January. To outfit her, New Balance gave her a pair of NBx 2-inch Cocona split shorts ($40), and the NBx Cocona sleeveless tank ($38), a pair of NB 758 training shoes ($90), and the 2009 Nduro Mini athletic watch ($70); NewBalance.com for retailers.

RELATED:   I Lost 150 Pounds: Monica's Weight Loss Transformation To A Brand New Self