Home » Weight Loss Before and After: How Holly Lost 60 Stubborn Pregnancy Pounds 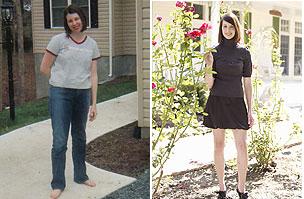 Holly Hunt was always the kind of person who could eat anything and never gain a pound. But during her pregnancy with her second son, Conner, in 2004, she put on 60 pounds that just stayed put. “It was scary,” Holly says. “I felt like I was stuck inside a fat suit.” Even scarier, her doctor told her she was at risk for type 2 diabetes.

To get her old body back—and keep her good health—Holly joined Weight Watchers. She soon learned what a real portion looked like.

“Before, my portions were matching my husband’s, and he’s a big guy,” she says. Her husband, Michael, showed her how to lift weights, focusing on different muscle groups three times a week. Holly started running on a treadmill, too. In five months, she had gotten her 130-pound figure back.

Now a size-6, Holly is no longer at risk for diabetes, and she’s found a great way to connect with Michael.

“When I exercise, I feel better about myself,” she says. “And when I feel good, it benefits him, too.”

Her summer snack
When the weather gets warm, Holly likes to make fruit smoothies as her afternoon snack. She blends ice with frozen strawberries (and sometimes raspberries and blackberries), vanilla soy milk, whey protein powder, and 2 tablespoons of Splenda.

Easy portion control
If Holly’s in the mood for something sweet, she eats a quarter-cup of Breyers CarbSmart ice cream in a ramekin, so she can control her serving size.

How she stays motivated
When Holly gets bored with her weight-lifting workout, her husband shows her new moves she can incorporate into her routine while still working her major muscle groups.

Holly rocks!
To make her miles on the treadmill more comfy, TAF (The Athlete’s Foot) and New Balance sent Holly the new WR769 running shoe and Burnout Tee ($100 and $45, respectively), and a $50 TAF gift card to help her buy more gear.