How much exercise needed for weight loss? 275 minutes per week! 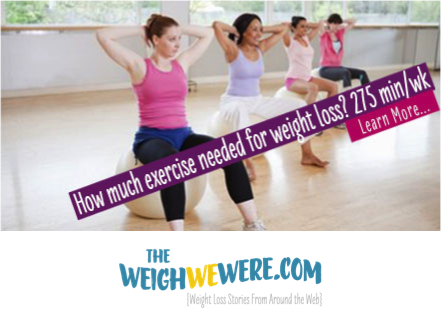 A study published in the July 28 issue of Archives of Internal Medicine finds that overweight and obese women need to do more than just limit calories in order to sustain a 10 percent weight loss over two years: they also need to exercise 55 minutes per day, five days per week.

Overweight people account for more than 65% of adults in America, and it is a serious public health concern. “Among obese adults, long-term weight loss and prevention of weight regain have been less than desired,” write the authors of this recent study. “Therefore, there is a need for more effective interventions.” Experts have recommended at least 150 minutes of exercise per week through their suggestion of 30 minutes of moderate physical activity on at least 5 days of the week. More effective long-term weight loss maintenance, however, may require more frequent exercise.

The study, conducted by John M. Jakicic, Ph.D. (University of Pittsburgh) and colleagues, calculated the amount of exercise needed by studying 201 overweight and obese women who enrolled in a weight loss intervention between 1999 and 2003.After all women were instructed to eat 1,200 to 1,500 calories per day, the researchers divided them into one of four physical activity groups: one group burned 1,000 calories per week, one burned 2,000 calories per week, one experienced moderate intensity, and the last experiences vigorous intensity. The women also attended group meetings that discussed strategies for changing eating and exercise habits and received telephone calls with the intervention team over the two-years of the study.

Results at the end of six months showed an average weight loss of 8 to 10% of initial body weight for women in all four groups. Maintenance of this weight loss, however, proved more difficult. At the end of two years, the average women’s weight was about 5% lower than initial body weight, and there was no significant difference among the four groups.

Of all the women, 24.6% managed to sustain a weight loss of at least 10% o percent of initial body weight over two years.These women were more physically active than those who lost less weight, burning an average of 1,835 calories per week or having exercised 275 minutes per week more than baseline activity levels. In addition, this group of maintainers completed more telephone calls with the intervention team, practiced healthier eating behaviors designed for weight control, and ingested a smaller amount of dietary fat.

Related Items
← Previous Story Less Sleep Means More Weight! Find out how much sleep you need…
Next Story → Why you shouldn’t exercise to lose weight, explained with 60+ studies