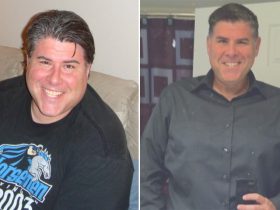 I was once a 300-lb. potato-chip addicted couch potato, and lived that way for almost 20 years before getting a wake-up call five years ago when my weight hit an all-time high of 345 lbs. There I was on Jan. 5, 2009, sprawled on the couch with my usual bag of chips, watching Oprah, when a miraculous vision appeared before my eyes: Carnie Wilson…who was for the first time ever, thin, radiant, and happy.

I’ve always considered her my genetic twin: a fat kid who became an obese adult struggling constantly with her weight. Seeing Carnie finally free of the ‘obesity demon’ filled me with hope. I pried myself off the couch and shuffled over to the computer for a Google search. I found her fitness guru, who turned out to be a former pro wrestler named Dallas Page.

He prescribed regular cardio-yoga workouts that he created years prior in order to heal his own battered body following a wrestling career. Through my connection to Dallas Page and DDPYOGA, I met Terri Lange, a woman who has kept her weight off for more than a decade. Both Dallas and Terri saw I was ready to do whatever it would take to get my life back and they agreed to mentor me. Their support was crucial because I believe no one makes it out of a situation like mine on their own. They also helped me to clean up my food choices. I listened to their suggestions while also realizing that this time, I didn’t want anything that resembled a diet. They only made my relationship with food more unhealthy.  My new way of eating and living wasn’t always smooth sailing, but for the first time, I wanted change more than I wanted the taste of a binge food. After a lifetime of struggling with yo-yo dieting and regaining weight, I dropped 180 lbs. without surgery, dieting, or drugs.

Aside from good nutrition, my transformation also required an honest look at what drove me to overeat.  For many years, three main life situations contributed to me drugging myself with food: A toxic, hostile office environment; an unhappy 20-year relationship; and deep sadness over the long process of losing my father to Alzheimer’s disease. I didn’t deal with all three at once, that would have been overwhelming…but I decided it wa time to wake up and face them.  My boyfriend at the time was not a bad guy at all, but we weren’t right for each other. It was a relationship of safety and convenience for both of us and we knew it deep down, but never touched the truth in terms of discussion.  I chose to hide this way for 20 years, overeating to compensate for the feelings of emptiness that came from being in a romantically loveless relationship. When I realized I no longer wanted to live a lie, and live with stuffing myself as a way of life, I got courageous enough to be truthful with him and part as friends. I also made the bold move to quit my job and become a freelance writer.

The last hurdle was the most painful: witnessing my father’s transition and what a long one it was.  He lay in a nursing home bed for nearly a decade, unverbal and mumbling. The good part was he was unaware of time and seemed to be in another dimension most of the time. But my heart ached every time I visited him because I missed the man I grew up with and loved so deeply. For the first half of his illness, I ate myself into oblivion. For the second half I was front and center, standing squarely in reality and whatever feelings that brought. Overeating only compounded my problems and contrary to what I’d rationalize to myself, never really made me feel better. Stuffing myself till I was groggy with a hurting stomach didn’t alleviate the sad feelings, it only send them deeper underground. It was actually a huge relief to have the luxury of feeling the feelings in the moment so I could let them pass through me. I was there for my father and for myself like never before. And when his time finally came, I was able to embrace it and be there at his side, fully present with my tears, my sorrow, my gratitude.

I’m telling you all this to show what’s involved in real transformation.  The diet industry wants to keep us trapped. I’m just another average American hardcore overeater who made it out of the woods.  I’m living proof that it’s possible. Especially since I was 44 when I began…the time in a woman’s life when metabolism is alleged to grind to a halt and life is said to be downhill from there. This year I turn 50 and I look and feel better than I did in my 20’s!

A major thing that really helped me, in addition to good nutrition and eating when I was hungry (and not to fill an emotional need) was coming to terms that food is meant to be enjoyed and not outlawed. I love food now more than I did in my days as an overeater because I eat with awareness, not in a trance. Breakfast will usually be a couple of eggs with sauteed vegetables, or if I’m in the mood for carbs, I make it healthy: a whole-grain hot cereal with chia seeds and unsweetened shredded coconut which is delicious. I love juicing and practice it regularly as a way to get more vegetables in. Nothing is off limits: I won’t play the NEVER AGAIN game because that just sets me up for longing. I find, however, that I feel better when I avoid dairy and wheat products and use them very sparingly. I adore lentils and even bake with them! You haven’t lived until you’ve tried a piece of my coconut almond cake made from Chick Peas. I eat moderate amounts of carbohydrates, usually only once per day. Often it will be rice, potatoes, quinoa, or gluten-free pasta. I’m definitely ‘veganish.’ I’m not 100% anything. I love vegan dishes, but salivate over meatballs too much to give them up! For dinner I love grilled salmon or catfish with a side of sauteed zucchini, spinach, or asparagus. Another favorite dinner: a bowl of homemade lentil or tomato soup. Sometimes it’s all I want. The amazing thing I discovered, as a lifelong emotional eater is, when I dealt with the things that were plaguing me to overeat, I didn’t have to micromanage the food or obsess over it. Instead, I reconnected to my body’s wisdom and let it handle the speed of weight loss, and let it tell me when it was hungry and when it’s had enough. We come into the world with this ability and all too often it’s conditioned out of us. I relearned it and it really wasn’t all that difficult.

Another change I made is having exercise be a regular part of my life, whether it’s popping in a DDPYOGA DVD, going for a long walk, or lifting weights at the gym.

I love being a smaller size but I’m clear that it doesn’t make me a better person.  I suffered too much with this culture’s size bigotry to play that game.  What it does make me is FREER! And freedom is the biggest gift of all. I no longer panic when boarding a plane, wondering if my circulation will be cut off halfway through the flight because I’m too big for the seat.  I go to plays and movies now with abandon and love shopping. No longer do I have to settle for what fits. I saunter up to clothing racks now and rifle around for my favorite colors. And by the way, it feels GREAT to wear color.  For 20 years it was black, head to toe.  Even during heatwaves.  Try to picture a 345-pound woman on a hot day wearing all black.  I probably don’t have to go into much detail regarding how dangerously foul my mood was. Heatwaves, airplane seats, and delicate folding chairs no longer bring me to my knees.  It feels so fantastic to be free.

If you’re willing to dig deep, look at yourself and your life, there are rewards to be enjoyed, I promise.  I’m living a life I never thought would be possible. I’m the weight I was in middle school. I have a fantastic, loving, and romantic man in my life who is a partner in every way. And my life purpose with writing is satisfying and fulfilling.

Since I get asked quite often how I made the transformation, I write a blog at www.staceymorris.com , which has plenty of good and fairly simple recipes. I counsel others who write to me and pay it forward. I didn’t make it to where I am on my own. I had lots of support along the way during my transformation, and now it’s my turn to give it. 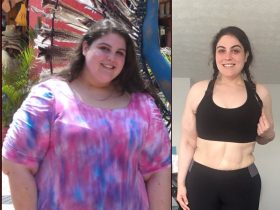 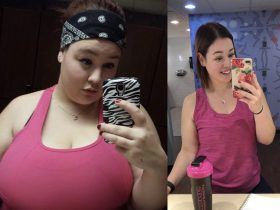