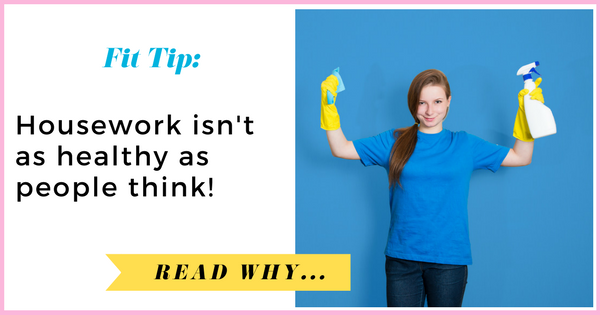 Claiming housework as exercise may be a mistake finds research in BioMed Central’s open access journal BMC Public Health. For the same amount of time people who included housework in their self recorded moderate to vigorous physical activity tended to be heavier than those whose time was spent in other forms of exercise.

The UK Department of Health recommends 150 minutes of moderate to vigorous physical activity a week. When questioned about their activity levels only 43% of the population reported meeting or exceeding these guidelines, and two thirds of these people included at least 10 minutes of housework in their weekly tally.

This analysis of data, from the Sport NI Sport & Physical Activity Survey (SAPAS) by the University of Ulster, showed that people who included housework as part of their weekly exercise tended to be heavier. Prof Marie Murphy who led this study commented, “Housework is physical activity and any physical activity should theoretically increase the amount of calories expended. But we found that housework was inversely related to leanness which suggests that either people are overestimating the amount of moderate intensity physical activity they do through housework, or are eating too much to compensate for the amount of activity undertaken.”

Women and older people included higher levels of housework. For women, exclusion of housework from the list of activities meant that only 20% met current activity recommendations. Prof Murphy continued, “When talking to people about the amount of physical activity they need to stay healthy, it needs to be made clear that housework may not be intense enough to contribute to the weekly target and that other more intense activities also need to be included each week.”