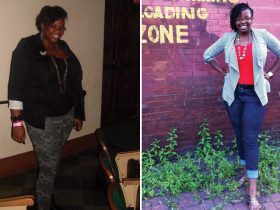 How I Lost Weight: Kiera Adopts A Plant-Based Diet And Loses 65 Pounds

He went from eating a pound of bacon at breakfast to following a 1,400-calorie-a-day diet, and lost 110 pounds in the process

Eat all you want, any time you want. That used to be Aaron Davila’s mantra, and it showed. Between 1994 and 2000, he gained 120 pounds and his pants size jumped from size 34 pants to 44—and he tucked them under his gut. He has since drastically altered his diet (abandoning his Wednesday ritual of three Chipotle burritos for dinner!) and became a personal trainer based inMadison,Va.

For years Aaron’s wife encouraged him to lose weight, but he was a “happy big person” who didn’t see the need to. One day he was struggling to carry his then 18-month-old son upstairs from the basement. He froze halfway up the second flight of steps. Panting and sweating, he could no longer walk, so he decided to make over his life.

Aaron used to consume 6,000 to 7,000 daily calories, most of it junk food. Six fried eggs, 1 pound of bacon and eight slices of bread was a typical breakfast. Now he eats 1,200 to 1,400 calories of mainly vegetables, fruits, and lean meats like chicken and turkey. He has also given up his 2 liters of soda each day and drinks mostly water. For exercise, he works out 5 to 6 days a week, doing a combination of 40-minute cardio and 60 to 90 minutes of weight training.

Holidays are especially hard for someone who still appreciates food as much as Aaron does. To prevent himself from overindulging, he keeps a “before” photo that reminds him never to return to his former self. “I keep looking back at where I was and where I am now. And, as wrong as it might sound, I love being the one who looks the best at all the gatherings.”

Aaron likes to compare his old 44-inch pants with the 32-inch ones he now wears around the waist, not under the gut. He also enjoys how excited his sons, ages 4 and 10, get when they ask to accompany their father to work out or shop for healthy foods.

Educate yourself. He didn’t want to just eliminate carbs to get in shape. So he read up on nutrition and tries to lead a balanced lifestyle that calls for eating healthy, reducing calories, and burning more energy than he consumes.

Look at the big picture. Rather than counting how many pounds he lost in one particular week, he focused on his cumulative weight loss. “Instead of saying 12 pounds this week and 8 that week and 8 this week, I would say ‘So far I have lost 28 pounds.’ ”