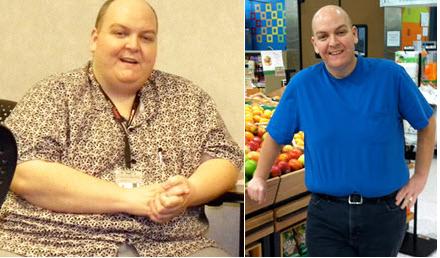 When Bryan Ganey, 39, was hospitalized for a pulmonary embolism, he realized that his 577-pound weight was putting his life in danger. Now he’s nearly half his size and in better health than ever.

After years of feasting on fast food and other junk food, Bryan Ganey, 39, ballooned up to 577 pounds. “On many occasions I easily consumed 10,000 calories a day,” he says.Bryanremembers bingeing late at night, and then not eating again until the following evening. At the same time he was ignoring his body’s other needs, like sleep and hydration. “My lifestyle was a little out of control,” he says.

The Turning Point
One day in 2010Bryan noticed that he was more short of breath than usual. “I couldn’t breathe; I was convinced I was having a heart attack,” he says. After a battery of tests at the hospital, the doctors determined that he had a pulmonary embolism—this meant blood clots were beginning to collect in his lungs, which, in the long term could cut off his oxygen supply. “I realized I could die at any minute because of my extreme obesity. I knew it was time to take action.”

The Lifestyle
Every doctor, nurse, and specialist thatBryan saw told him that weight loss surgery would be his only salvation. Still, he was convinced he could lose weight the old fashioned way.

“For diet, I started with the low-fat, low-sodium diet the nutritionist in the hospital gave me and modified it with common sense.” These daysBryancontinues packing his diet full of fruits, vegetables, low-fat dairy, and lean meat. He sticks to around 2,500 calories daily, eating about 5 to 6 times. He’s found that adhering to a schedule prevents him from falling trap to the starvation-binge cycle that used to plague him. He also uses a measuring cup and a scale to allocate portions. “I don’t trust my eye or estimation. I don’t believe in my mind’s ability to know the proper size.”

The fitness aspect of his weight loss plan came slowly. InitiallyBryancouldn’t walk unassisted because his lung capacity hadn’t come back, so he started by going to the grocery store and pushing the cart around. Then he began practicing basic movements such as sitting down and standing up as many times as he could in a row and walking to the end of his driveway and back. “Walking is something anyone can do if you find a pathway or sidewalk,” he says. “After a few months of that, I started walking long distances, eventually up to 10 miles.” He now exercises three times a week in his company gym with the help of a trainer. He has a 5-K race under his belt, and plans to run a 10-K in March and a half-marathon in November.

The Motivation
Bryan’s newfound energy inspires him to keep losing. “Gaining mobility was like shackles being lifted. I’m able to get around easier and I can fit in a car and fly in an airplane,” he says. Those small wins keep me motivated.”

Blogging also keepsBryan accountable for his weight loss. Over a year ago he took to the internet to document his weight loss, and now it’s something he’ll revisit to remind himself how far he’s come on his weight loss journey. “It’s kept me going,” he says. “I can look back and I see where I was feeling good and times when maybe I hit plateaus. It helps me get through highs and lows.”

The Reward
Along with the pounds, the health problems that used to burden Bryan are melting away. He’s brought his cholesterol level down from a whopping 250 to a healthy 100. He’s shaken his sleep apnea, lowered his blood sugar, and went from 10 medications—including ones for his heart and blood pressure—to just one. “Instead of getting bad news when I go to the doctor, I have a positive experience.”

There are also psychological perks. “It used to depress me when I was really big—people would stare at me, especially little kids because they hadn’t seen someone so large before,” he says. “After losing 150 pounds, it stopped. I didn’t look much different than anyone else.” Plus,Bryan no longer has to order specially made clothes or shop at big-and-tall stores. “ I have a more positive outlook, and I don’t get depressed.”