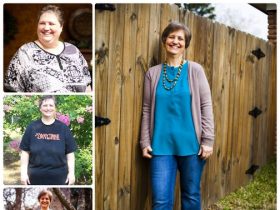 Weight Loss Before and After: I lost 166 Pounds And Started My Life Journey

A doctor’s warning motivated her to join a gym and overhaul her diet. Since then she’s lost 86 pounds (and counting)

Gerri, a teacher from Lee’s Summit, Mo., has battled a myriad of health problems that put her on a roller coaster ride of weight gain and loss. Being overweight just seemed to cause more medical issues, which sparked a vicious cycle that led to additional weight gain. Yet, she was oblivious to the fact that she weighed 273 pounds until she hopped on a scale at the doctor’s office.

After learning how heavy she was (and receiving a prediabetes warning from her doctor), Gerri decided to join a gym in fall 2009. Months passed and she continued paying fees for a facility she rarely used. Then she started dating a guy who had recently lost 7 pounds, and that triggered her competitive edge. “Well, he is not gonna outdo me,” she said to herself. She went to the gym that Monday, Jan. 4, 2010, and never looked back.

She learned to control portions and sticks to 1,200 calories a day. Greasy fried foods, red meat, and soda are no longer the stars of her diet. In the beginning, she would dedicate half an hour to doing something active every day. In September, she joined 24 Hour Fitness and began meeting with a trainer, TJ, who introduced her to Bodybugg, a portable device that logs calories and fitness activity. “What a lifesaver,” she says. “I never leave home without it on my arm.”

TJ also helped Gerri realize that despite her new size, she had poor posture, endurance, and flexibility. With TJ’s help, the woman who couldn’t even hold a 5-pound dumbbell above her head 2 months ago can now hoist 15 pounds above her head while balancing on a Bosu ball.

Like any good trainer, TJ pushes Gerri to improve her physical strength. But he also calls her out on her negative attitude when she thinks, “I can’t change and become a different person other than the fat miserable person I have always been.” Her parents have also been huge cheerleaders on her road to weight loss. Inspired by their daughter’s success, they, too, signed up for the gym.

Gerri’s brother recently got married, and many relatives didn’t recognize her at the wedding. Her family gasped when they finally figured it out. She is also proud of her progress at the gym. “Just making it through my whole training session now is a major improvement!” she says.

Don’t obsess. “I don’t live and die by the number on the scale any longer. I go by how I feel and how my clothes fit.”

Pay it forward. Gerri has decided to go back to college and study exercise science so she can help others the way TJ supported her.