Real Weight Loss Success Stories: Jennifer Cut 30 Pounds After Her Doctor Told Her to Get Healthy 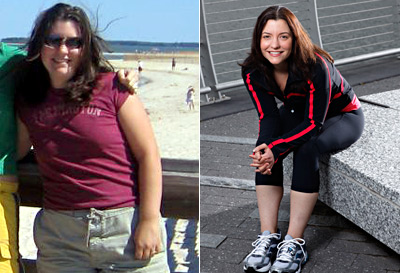 Once a slim high school tennis player, Jennifer Gilman packed 30 pounds onto her 5’4″ frame during college. There, she stopped exercising and started hitting the dining hall—hard. “I’d eat what I now know is three portions of pasta at one time,” says the 32-year-old university administrator from Washington, D.C., whose weight peaked at 180 pounds. After graduation, she shrunk from a size 14 to a 10 by counting calories, but within six months her new clothes were too tight again. Her weight hovered in the 170s for the next eight years.

On her doctor’s advice, Jennifer joined a gym in January 2009 and hired a trainer. For her first session, she recalls, “I couldn’t even find a T-shirt that fit!” When the trainer took her measure­ments and told her that her body-fat percentage was 35, Jennifer felt embarrassed—and then determined. “I wanted to prove I could do this,” she says.

Jennifer fit in a.m. treadmill and elliptical workouts five days a week, and did free weights under her trainer’s supervision. She kept a food journal and began eating six mini meals a day instead of two huge ones. It paid off: She lost 33 pounds by June. But then she hit a wall. “I just could not move the scale!” she says. To kick up her calorie burn, she added cardio intervals to her workouts, and healthy foods like spinach and tuna to her diet. By November 2009, she was at 135 pounds. “I felt empowered,” she says. “I truly never thought I could lose the weight.”

The girl who couldn’t do a single pushup can now crank out 30 of them in a minute. “I have much more energy these days,” says Jennifer. “I feel like a completely different person.”

Stay local. “My membership at a fancy gym was gathering dust, so I joined a gym closer to home. Now I have no excuse not to go.”

Be creative. “Cheerios with raisins and nuts satisfies my nighttime craving for sweets.”

Gain a following. “I started a Twitter feed to stay motivated. It connects me with other people who are living healthy lifestyles.”