Male Before And After Weight Loss: Kyle Lost 136 Pounds With Healthy Eating 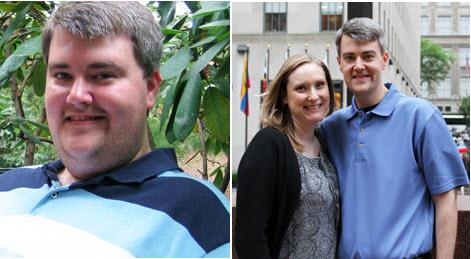 Kyle Calderwood, 32, whipped his eating habits into shape with the help of Weight Watchers and lowered his blood pressure (and pants size) in the process

Kyle Calderwood, 32, says he’d always been heavy, but recalls really packing on the pounds in the years following college. “My wife and I joke that after we got married we became complacent.” He found himself relying on quick meals at restaurants and fast-food joints, while not exercising. Eventually Kyle blossomed to 332 pounds.

The Turning Point
Kyle’s weight took its toll on his health, saddling him with problems spanning from high blood pressure to sleep apnea. “I knew all along I needed to lose weight but it wasn’t until health issues started mounting that I had had enough.” For him the last straw was being medicated for his high blood pressure at age 26. “It shocked me to be 26 and on blood pressure medication,” he says. “That kick-started things.”

Not only did Kyle’s health weigh on his mind, but his wife, who had recently started Weight Watchers herself, also began expressing concern that if they ever had children he wouldn’t have the energy to run around and play with them due to his weight.

The Lifestyle
At his wife’s urging, Kyle finally joined Weight. The program appealed to him because it allowed him to eat “normal” foods. “My first weigh-in was a real eye opener and a rude awakening,” he remembers. One of the most important things he learned was portion control. “I used to eat so much my stomach would hurt,” he says, “A major part of my weight loss was eating smaller meals.” With the program’s guidance he integrated more fruits, vegetables, and lean protein into his diet. He also made the decision to give up mayonnaise, which he says he used to put on everything, and fast food. While Kyle didn’t initially subscribe to an exercise plan, now he works out in a home gym nearly everyday. “I’m getting my tone back.” He also plans on starting to play basketball with his co-workers.

RELATED:   Before And After: Alicia Lost An Amazing 175 Pounds By Diet And Exercise

The Motivation
Kyle still has his original work photo ID with his pre-slim-down picture to remind him of what he used to look like. “People don’t even think it’s me,” he says. “It’s a good reminder because it’s something I have to look at constantly.”

The Reward
Along with leaving 136 pounds in the dust, Kyle’s shrunk his waist, going from size 48 pants to a size 34. More importantly, his health is back on track, and recent blood work revealed that his blood pressure is right where it should be. “I’ve gotten a few years of my life back,” he says.

Kyle’s Tips
Start small. Weight Watchers’ incremental goals have helped Kyle stay focused. “If when I walked in there they told me I had to lose 135 pounds, I would have said there’s no way.” Instead Kyle began with a 20-pound goal, and then kept meeting additional weight loss targets.